The men who hold the power stand at the back of the stage, literally behind the scenes. They wait quietly in dark suits and sunglasses, their hands behind their backs, casting large, looming shadows. In the lights at the front of the stage, the men who struggle and cry and storm recognize their limitations only at the end, not having imagined that the walls towering proudly around them only keep them in, that their protectors actually limit their freedom, controlling the actions they believed they were choosing themselves. 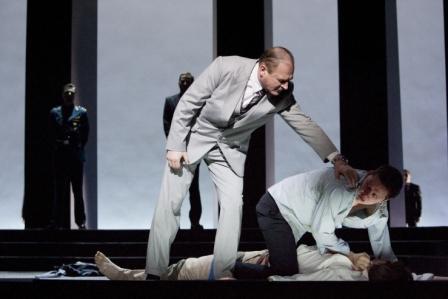 Friedrich Schiller’s Don Carlos, set in late 15th century Spain, dramatizes the limitations of powerful men in a world they think they rule. Schiller (1759-1805), a contemporary and colleague of Goethe, was a German poet and philosopher whose plays (like The Robbers, Maria Stuart, and William Tell) have become classics that widely occupy the German stage even today (whether one likes it or not).

The first three acts of Don Carlos follow the title character as he navigates  love, duty, and moral justice. He’s a kind of Hamlet, a poet-prince unable choose a course of action and caught in increasingly complicated intrigue. King Philip II, Carlos’s father, married his son’s ex-fiancée – whom Carlos still loves. Carlos‘ best friend, the Marquis of Posa, wants him to leave his homeland of Spain to lead a rebellion – against Philip – in the Netherlands. The last two acts shift in focus to Philip as the state slips out of his hands. Unsurprisingly (spoiler alert!), bodies pile up in the end: Carlos and the Marquis of Posa both die. Spain meanwhile faces an uncertain future ruled by shadowy religious interests who govern through deception (the Inquisition, which nobody in the play foresees, or shall we say, expects).

In Roger Vontobel’s production of Carlos, which opened at the Schauspiel Dresden in March, 2010, dark figures continuously lurk at the edges of the stage: the servants and the protectors, observing and noting the action. Their bosses look like the Kennedy clan: they wear and toss around expensive outfits, long silk gloves, and tailored three-piece suits without care or worry, all while sipping pink martinis. This is Old Money at ease.

As befits Schiller, Chrstian Friedel’s Don Carlos dominates most of the first three acts like a spoiled boy in a supermarket: he grabs at what he wants (his mother/ex-fiancée, some power from his father), and screams in a fetal position when denied. Servants quickly clear his tantrums’ debris with silent vacuum cleaners.

The state makes itself felt slowly. Cameras follow the characters as they try to hold secret conversations behind the scenery, black walls in which doors can swing open to give the feel of an important public building’s columned-facade. In the end, six men in their dark suits shoot Marquis of Posa dead in thundering gun fire; King Philip personally kills his son. And the Catholic Church, speaking through a small hooded woman, finally reveals the truth to Phillip (or all they feel he needs to know). She disappears like smoke as Philip collapses powerlessly on the edge of the stage. The revolution dreamed of by the younger generation yearning for freedom – to think, to speak, to act – has no chance in this oppressive atmosphere.

Vontobel by and large handles the Schiller ably in his three and a half hour production. His bland use of technology — overemphasized echoes, the videography — adds little or nothing to actors’ performances. And the symbols of the state-apparatus, especially the everpresent body-guards, read like Hollywood clichés. Nevertheless, this Don Carlos resonates with our own increasingly paranoid society in which we must constantly seek a balance between safety and freedom, and often fail. I’ve never seen Don Carlos staged before, and I enjoyed seeing the complicated play staged so competently as itself – much more than Karin Henkel’s Cherry Orchard, a play we know so well that, I feel, we must demand more creative choices from directors. But the Theatertreffen should still ask for more than productions whose key adverbs are “ably” and “competently” – modifiers that hardly modify, hardly enlighten the action anew.