C: The dog that plays Hitler’s German shepherd Blondie only plays himself. He is always universally a German shepherd. So a German shepherd is seldom cast as a poodle. […]
S: Yeah, what would happen if a poodle was cast as Hitler’s Blondie?
C: Everybody would think that you were performing Faust.
(René Pollesch, Cappuccetto Rosso)

Be careful when you’re casting dogs – your audience will never see a poodle as a German shepherd. In his 2005 play, German playwright and director René Pollesch attacks representative theater for this oppression: women cannot appear as men; representation does not allow them political, social, or artistic equality.

With the rise of Berlin’s Ballhaus Naunynstraße, actors and directors with “migrant backgrounds” (see Cory Tamler’s post-migrant lexicon) have become increasingly visible. This poses a casting challenge to representative theater: can a person who looks „Turkish“  play classic „German“ roles believably – I mean believable for white-bread, bourgeois audiences? Nobody questions the ability of Germans to perform the Russian „Cherry Orchard“ or the American „Death of a Salesman“ – even if I, as an American, do raise questions about too-random signs of Americana in Stefan Pucher’s production of Arthur Miller’s classic, for example. But something changes when a Turkish-German plays a „German“ role…

Suddenly people ask the question Fadrina Arpagaus also notes in her post on the “post-migratory” friendliness of the 2011 Theatertreffen: What story is told when a Turk plays Faust?

Let’s consider the utter absurdity of this „post-migratory“ term. I’m a white American, genetically a mix of (probably) Swedish, English, Cornish, and German. If I settle in Germany permanently, my children – the children of an immigrant – will never be considered to have a migration-background. Not only am I a so-called „G8 foreigner„, but I’m also “white”. The term Migrationshintergrund singles out people “of color” and puts them in a separate category; it linguistically organizes Germany into those who belong and those who never will. There are „German“ roles and „non-German“ roles, and you are cast at birth.

Questions of ethnicity and casting have long been debated in the American theater, as well as in film and television. Today, these questions tend to be addressed in two ways: with cross-ethnic casting, a conscious decision to choose an actor based on his or her race to perform a role he or she typically wouldn’t, and with color-blind casting, which asks directors to simply cast the “most talented” applicant, ignoring race. It’s been common to see African-Americans in classical roles for decades: Orson Welles cast only black actors in his so-called Voodoo „Macbeth“ (1936); James Earl Jones played King Lear in a 1974 production of Shakespeare’s play in New York City (the rest of the cast was a mixture of black and white), to name just two famous examples. (I’m focusing here on African-Americans as one obvious „other“ in the colorful American cultural landscape.) Color-blind or cross-ethnic casting happens often enough that the playwright August Wilson gave a speech denouncing one side effect of the movement: „To mount an all-black production of a „Death of a Salesman“ or any other play conceived for white actors as an investigation of the human condition through the specifics of white culture is to deny us our humanity our own history, and the need to make our own investigations from the culture ground on which we stand as black Americans.“

Of course, there’s a strong tradition of black playwriting in America, with great roles (if not enough) written for black actors by writers such as Lorraine Hansberry, LeRoi Jones, Wilson, and Suzan-Lori Parks, to name a few. (A whole other post could be devoted to the complete disregard in Germany for these playwrights.) Regional theaters in St. Louis, Washington D.C., and Philadelphia are run by African-Americans for predominantly African-American communities.

None of this should be taken to say that the performing arts in America have no problems with ethnicity and casting. (There was a recent, quiet spat about a black actor appearing as a Norse god in the Hollywood blockbuster „Thor“.) But with long established practices of cross-ethnic and color-blind casting, and with theaters devoted to developing and showcasing the talent of minority artists, audiences don’t (often) hesitate to accept – to believe – actors of any ethnic „background“ in classic roles. Artists can and do make statements with casting – and black actors can play Hamlet or Faust without changing the story.

So let’s flip Fadrina’s question: what happens when a Turk does not, cannot play Faust? Because such casting does not need to tell a different story.

This is not idle blogosphere musing. Well, it is – but these decisions in representation do have consequences. The performing arts – film, television, theater, dance – can allow us to imagine new possibilities. Before a black man became the president of the United States, we had to imagine a black man as the president of the United States. And, thanks to films and television series like „24“, which reached enormous audiences, we could imagine and believe in this possibility, in part because we saw a representation of it in action. 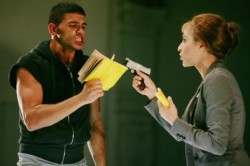 The representative theater can oppress audiences and actors alike, as Pollesch points out, by limiting the possibilities of what we see. „Verrücktes Blut“, in part, also wants to point out this process, as the authors Nurkan Erpulat and Jens Hillje make clear in the prologue to the published text: „This play is not about the student. This play is not about the teacher. This play is not about the school. This play is about the gaze upon them. It’s about the audience.“ If we can begin to see these students in Friedrich Schiller’s classic roles, we can also imagine them as Germans – while not forgetting or simplifying their identities in multiple cultures, in this play presented in a „migrant-background“ neighborhood by “migrant-background” artists. Ballhaus Naunynstraße, and many other (mostly free scene) theaters like it, provide a home for artists with interesting backgrounds to begin telling the stories they want to, beginning a process that can end with totally unremarkable casting choices, and an expanded understanding of what it means to be German. (For an excellent book on ethnicity in the German theater, see Katrin Sieg’s „Ethnic Drag: Performing Race, Nation and Sexuality in West Germany“.)

Revealingly, while we ask whether and how a Turk can play Faust at the 2011 Theatertreffen, this hub of high art, the commercial German theater has provided an answer: who cares – just cast a great actor who can make you money! Udo Lindenberg is a German rock icon. He oozes sex (or did, in his 1970s and 80s heydays), he wears a big hat and dark clothes, and he sings loudly. In 1983, the West German star played a concert in the East, and later became an icon of the fall of the Berlin wall, that great turning point in German history. With his music and personality, Lindenberg helps to define German identity. And as of January he has his own rock musical in Theater am Postdamer Platz in Berlin, which seats 1800 people – as close as you get to Broadway or the West End in central Europe. The man who plays Lindenberg? Serkan Kaya, an actor born in Germany to parents from Turkey. And none of the 200,000 people who have paid to see the successful „Hinterm Horizont“ (Behind the Horizon) seem to care about Kaya’s „migratory-background“. This non-debate epitomizes progress that the Theatertreffen can still only seem to dream of.