Our author looks back at the opening weekend’s productions – and discovers two bold, but utterly different artistic positions about the state of things.

In this sense, Simon Stone’s „Three Sisters“ and Kay Voges’ „Borderline Procession“ are a strong pairing for Theatertreffen’s opening weekend. Both stage these first-world problems right at home. And the production values of the two houses could not be any damn higher. Lizzy Clachan has transformed the Prozorov family home into a chic chalet (designed by some famous architect, the characters can’t remember who) where fireworks are shot off in summer and a light, dreamy snow falls in winter. The wood and glass jewel-box leaves its inhabitants visible and vulnerable in the dark night. As the house rotates, the audience can trace the characters’ small lives—as they play Playstation and get drunk and have sex and fall asleep.

From Genesis to Frauke Petry

The Dortmund team have made a borderline: a long, thin, meticulous strip of a house cutaway, meticulous. A whirlpool, garage gym, kitchen, living room, bedroom, bath. Outside: a red-light district, bus stop, parked van, the gated gate of the interior house, späti. I am sitting on the interior side, where, in the first act, people go about their daily lives in repetitive slow-motion. A woman showers and brushes her teeth for an hour. A man comes home from work and leaves again. A camera on a dolly tracks the loop around the oval, projecting the feed above the live action—“a loop, about what divides us.” Our view is then always partial and multiple—only the camera can see both sides of the barbed-wire, concrete border-wall between the two sides of the set.

Because of these strong, hermetic stage images, the spoken voice or text is separated from the physical bodies of the actors. One suspects that this most formally innovative element of „Three Sisters“—that the fast, banal repartee comes in an undifferentiated and ceaseless stream—may be little more than just a mic-ing problem in response to the Haus within a Haus. In „Borderline Procession“, actors read an assemblage of quotations from Genesis to Frauke Petry into a microphone in a corner of the set. Both texts toy with the relationship between the ‚classic‘ and ‚contemporary‘, approaching canonical material with a pair of shears.

Little more than a branding exercise

But the echoes between the two productions just made the differences more vast. Stone’s goldfish-bowl never gives enough oxygen to the outside outsize hopes and dreams of the eponymous three sisters. When things begin to unravel after the break, when the stream of chatter stops and the real screaming and wailing and fake blood start, the actors move from emotional mark to emotional mark with the hollow routine of postal workers. No offense to postal workers—maybe also like gymnasts on the vault sticking their landings over and over and over—arch your back and lift your arms and smile! And arch your back and lift your arms and smile! No surprises and still no mess. What I’m saying is: if you’re going for “total superficiality breaks down into raw despair” you better get actors who can ‚do‘ raw despair.   “Cunt! Cunt! Cunt!” screams Theo, totally unconvinced. It’s so embarrassing. I’m American, OK? We have Donald Trump, but we also have Viola Davis, eyes bloodshot and bleary, crying out for her dignity until snot streams out her nose.

Despair comes from broken dreams, and there’s no dreams here, no stakes. No “to Moscow!”, no Moscow, just a version of Brooklyn where you can find an affordable apartment on your phone from Basel (LOL). No one knows what they want. There’s not a word of Chekhov in „Three Sisters“—this “overwriting” is Stone’s signature move, an attempt to bring the classic text into the modern day. I’m skeptical, but I’m not a reactionary. It could work. Maybe last year’s „John Gabriel Borkman“ did work. But here, there are no big hopes inside small, trapped bodies. So to call this Chekhov is little more than a branding exercise. It’s not even Letts, or Akhtar, or Reza, or Albee (dear God, is he trying to be Albee?). There are plenty of fine playwrights on the banality of our daily life, who set plays in living rooms, who have despicable characters yell at each other, who still maintain political commitments. Who still seem to like—even root for—their characters. Natasha, whom I suspect we are supposed to detest based on her mewling characterization and reference to Trump’s gilded towers, is the only person onstage whose motivations are legible—squeezing alimony payments out of a deadbeat ex. To her I say: get that cash and burn that house to the ground. But this is so far from Chekhov’s dramaturgy of pathos and farther still from Chekhov’s feminism. This play reeks of dismissive, blase white male mediocrity and I’m putting that in print. 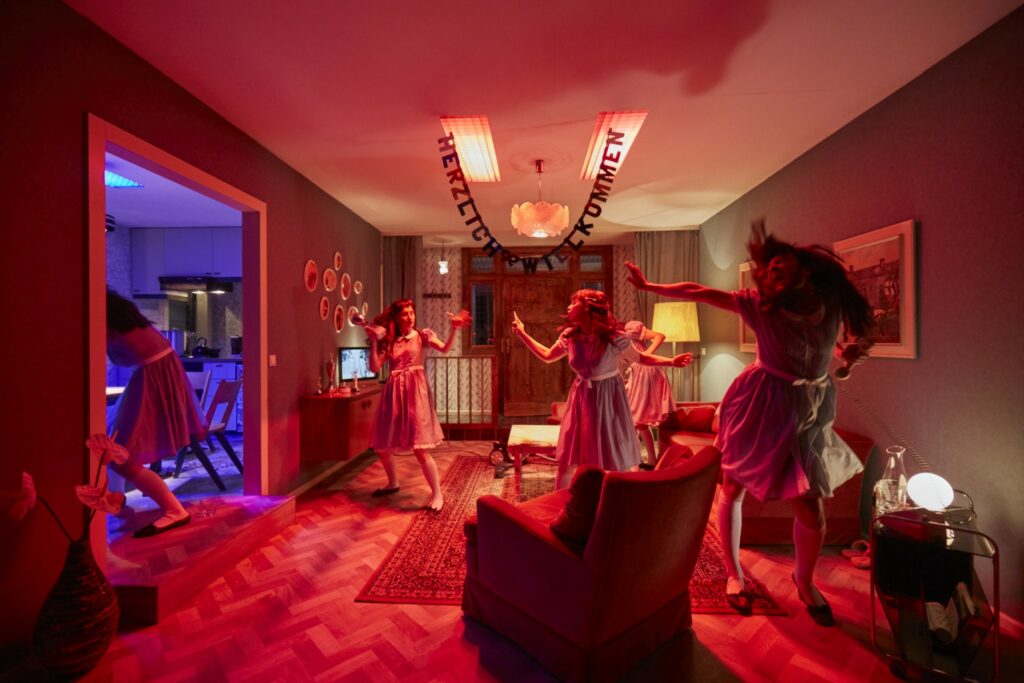 „The Borderline Procession“ takes dreams seriously. It understands dreams, their inscrutability, their Rorschach images, their own logic and terror. That you always wake up right before you die. The first act, „it is what it is“, the routine present. Part II is the near-future– soldiers now lead the procession, guard the gates. Dissidence is met with sexual violence. Political hate-speech becomes an ear-worm. Still, in some spaces, people find each other, they make out at a bus stop, an old man holds hands with a young girl, a bride and groom get married. These strong and fresh images, indelible: the bride with bloodstains spreading across her lap, a small bald man in a frock in the window of a sex show, goosestepping soldiers in gummy masks, an astronaut moon-walking through domestic space, an army of little Lolitas with red lipstick smeared across their mouths. By creating an overlapping series of images and classic texts, playing between the visible and the obscure, Kay Voges and team make much the same critique of modern life that Stone attempts. We try to connect. We fail. We search for language and all that comes is Britney Spears. „Oops, I did it again.“ But there’s also „Road to Nowhere“: „the future is certain, give us time to work it out“ (actually the whole soundtrack is great).

The treatment of our very of-the-moment precarity by „Borderline Procession“ is immediate and visceral rather than cool and detached. Voges‘ new theatrical form—drawing as it does on the work of Katie Mitchell or Frank Castorf or Gregory Crewdson or Matthew Barney or Lola Arias—understands the haunted beauty of suburban routine and the stakes of losing it. Voges understands that losing democracy is a first-world problem and takes seriously the hope of salvation. The hope of justice, who blindly taps his way through the third act, a pair of scales held aloft, balancing.

Stage editor, Exberliner magazine. Works internationally as a freelance radio producer (NPR Berlin) and writer. She holds a Ph.D. in Theatre from the University of California, San Diego. Postdoc at the Freie Universität, Berlin. Originally from New York City, she lives in Berlin.