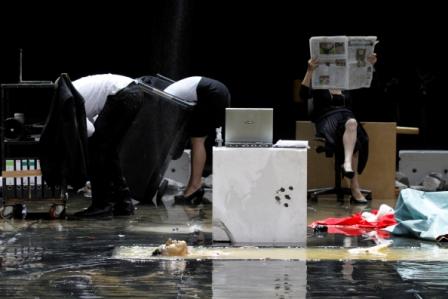 Waves of light ripple across the ceiling of the Berliner Festspielhaus auditorium. In the slowly spreading lake below, a woman, covered in mud and naked but for her underpants, battles and screws and dances with a shirtless man, his chest painted blue. Behind this elemental battle, sand pours from the heavens, a women reads a newspaper, and a man taps on a laptop. Another flips through a binder. While humanity invents ever new ways to please and progress, the feminine earth tumbles on the floor with the masculine water: the sky caves in, the flood keeps spreading, but nobody is responsible. “It’s possible for everybody to do everything correctly and still reach a faulty outcome,” a political voice broadcast over loudspeakers assures us. In these final moments of Elfriede Jelinek’s three-and-a-half hour The Work / In the Bus / A Collapse, I look up over my head at the rippling light, and feel like I am covered with water.

Directed by the hotshot young director Karin Beier at the Schauspielhaus Cologne, which she also leads, this production combines three catastrophy-themed texts by the Austrian playwright Jelinek, winner of the 2004 Nobel Prize for Literature: The Work, the part of which Beier selected handles the construction of a hydroelectric dam in the 1920s-50s; In the Bus, a deadly 1994 bus accident in Munich; and A Collapse, the 2009 collapse of Cologne’s Historical Archive into a subway tunnel.

Man controls technology and technology controls nature — until neither controls either. Work / Bus / Collapse repeatedly returns to construction and destruction, to the interactions of humans and water and earth. In Work, the actors stand on tables and spit bottled water into picturesque arcs, perfect fountains of aesthetically shaped, manufactured mineral water. A bit later, an older man in a suit and orange helmet jack-hammers a block of concrete, and a chorus of fifty men sing of progress and solidarity. But while humans can build an earthen dam to harness the power of water, they sacrifice their children in the process — Work ends as a woman, covered in white dust, cries out for her son. In the final section, Beier places the elements on the stages literally, with the masculine water and feminine earth. It’s a rare moment of earnestness (she undercuts most moments that could become emotional with slapstick, for example), highlighting actual physical material of the actors bodies as they dance ala Pina Bausch’s Vollmond.

Progress necessitates hierarchical relationships, the imposition of power by men over women, by humans over nature. And when these unstable dynamics slip out of control, as they inevitably will, progress means forgetting the consequences, forgetting the deaths. History has been lost in Work / Bus / Collapse — bodies interred in the concrete dam, archival material buried in the ruins of the library, any and all accountability shifted on to others.

But Jelinek and Beier provide an alternative to this dead-ending process. Its looping themes, ideas, and images never adding up to a plot, the performance rejects the ideas of progress and hierarchy. We cannot forget because the performance will not move forward and allow us to forget. Work / Bus / Collapse does not tell us what happened or why; it is itself a catastrophe, a flood of words and bodies.

Humanity has created a multitude of wonders, but we’re still mortal, at the mercy of our own incompetence and overwhelming nature: the solid earth can swallow us up in a moment . Through the reflections of water on the ceiling of the auditorium, Beier ties the audience to the figures on the stage. We are all of us responsible.