I sat down for a short discussion with Polish playwright Małgorzata Sikorska-Miszczuk after the staged reading of her play Burmistrz, The Mayor.

Shifting around in time (the title character appears as both the Mayor Before and After), The Mayor explores the costs of remembrance and the costs of willful forgetting in a small town in Poland. One character, the Penitent German, has become paralyzed by the weight of his father’s murders around his neck. A chorus of young Polish townspeople on the other hand, though proud of their historical monument (a monument apparently without memorial function), have no interest in discovering the roles their fathers played in the massacre of the town’s Jewish population during World War II—much less in taking on the associated guilt. After visits by the Mother of God and the Mayor of New York, the Mayor of this Polish town tries discover the truth. But his constituents ironically bury him under the town’s memorial. The Mayor was translated into German and English for the Stückemarkt, and is available at the Goethe-Institut’s Theatre Library.

What was the process of preparing your play, The Mayor, for this staged reading?

It wasn’t a long process. The director, Nina Gühlstorff, and I discussed the whole story via emails beforehand. Then I attended the rehearsal in the afternoon, watched the whole play, and spoke with Nina.

What was it like seeing The Mayor in German, a language you don’t speak?

It was actually quite a privilege not to understand the language at all. I could relax because had no idea how the audience was reacting, whether they liked it at all!

Your play revolves around the mayor of a small town in Poland, who works to remember a town’s horrible past. How did you create this figure?

There’s actually a real mayor I read about in the newspaper. In his town during World War II, perhaps inspired by the German army, people murdered their Jewish neighbors. The President of Poland was invited to a big commemoration of the massacre in 2001, but the mayor was the only one trying to discover the truth, that Polish people had committed these crimes. He was the only one who put the truth above the self-image of Poland: we were always the victims, not the murderers. The mayor was dismissed from his post, and he moved to Chicago and changed his name so as not to be recognized by the Polish community there. I wanted to say thank you to him with this play.

How do you personally practice remembrance?

I write a play. 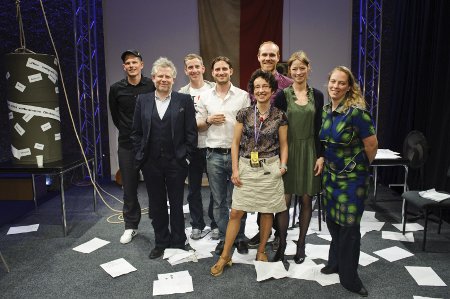