After watching the Theatertreffen premiere of „Death of Salesman“, directed by Stefan Pucher, we’re sitting on the banks of the Spree River in Berlin to chat through what we just saw. While we work away – selling our carefully crafted language to our adoring public – the artists are being honored, their hangers-on are smoking and drinking behind us.

Matt: I’m disappointed that we’re getting the Beatles for the premiere party music right now – I feel like Elvis would be more appropriate.

Leo: Definitely. The Lomans tonight even had an Elvis record in their fancy 50s living room. 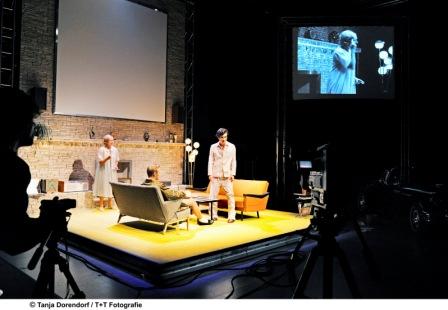 Matt: Did you read it as 50s? I saw the set as more late 60s, with all the burnt-orange furniture and mod chandeliers. And that gorgeous Ford Thunderbird was definitely 1960s.

Leo: True. I have to say that I’m not really sure how to read the period. It felt more like a juxtaposition of any Americana they could get their hands on.

Matt: Like the giant statue of a baseball player for example!

Leo: Or the stand with the USA postcards on it.

Matt: „Death of a Salesman“ was written by Arthur Miller in 1949, and when produced in a „period“ style, it’s usually set in the 1950s. The play has that brooding post-war feeling, in which the idea that everything is possible, if you only put your mind to it, was already proving to be deceptive and destructive. The Lomans are a Jewish family living in Brooklyn, lower-middle class strivers who will never „make it“, desperately want it, but don’t have the actual power to make it happen.

Leo: And the problem with this production is that you don’t really understand that they are „low“-mans. They seem to live in their suburban dreamland, with all the latest household appliances, a television in every room, and super-stylish furniture. It’s like looking at Ronald and Nancy Reagan in their General Electric wonder-home.

Matt: I think this was a comment on the recent economic crisis. The Lomans bought everything on credit – they speak of paying off their refrigerator for example – but can no longer bear the costs of the loans and need actual income. Their super-stylish everything is only a facade – just like the McMansions, now empty, dotting the American West.

Leo: There’s also an uncanny connection with the current crisis, when Biff and Happy talk about becoming the „Loman Brothers“. I guess, since 2008, there’s always „Lehman Brothers“ ringing somewhere in the back of your head.

Matt: The omnipresent video-cameras, which recorded the events and projected them in black and white in two-dimensions on the big screen, emphasize this feeling of bankruptcy lurking beneath the surface. The Lomans’ lives are a television show – and a melodramatic one at that.

Leo: The melodrama is also quite interesting. At times I got the feeling of watching a Todd Haynes movie. They had super-emotional music, really overdone acting, and this whole fake attitude all around them. The dream sequences, for example, were embedded in a booming score, which actually started to annoy me after a while. Also, whenever they quarreled or had some kind of argument, the acting felt „soap opera“, which is somehow fitting, since all the characters are constantly talking about illusion and pretense. And this is why I liked the final conversation between Willy and Biff so much. At this crucial moment, when they were „finally talking about the truth“, suddenly there was no technical elaboration or over-acting. Just actors talking. No music, no cameras.

And here’s another small detail I really found funny: Ms. Howard! Willy’s boss is, of course, a man in the original text, and although Pucher made him a her, he kept the name.

Matt: It was definitely a conscious decision. He could have cast a man, and chose a woman.

Leo: Ms. Howard’s attitude in the production is determined by her position, not by her gender. So she gets to be the real asshole, regardless of whether she’s male or female.

Matt: It would have been easy to turn her into a stereotypical „bitch,“ but Pucher refused to do that. He didn’t „comment“ on his casting of a woman. He just did it.

I felt like this show fit in well with another theme we’ve been following on the blog these past two weeks – Americanness in a German context. Which Cory elaborated on in her recent post.

Leo: I can’t say that much about the literal translation, but in terms of cultural translation I got the feeling that they presented it very much as a closed cosmos, talking about „the Americans“ while leaving out the fact that capitalism and its discontents have long since become a global problem. I didn’t really see that they wanted to establish a connection with our particular time and place, beyond creating a general feeling of „America“. I found it funny, though, that Cory told us during the intermission that whenever an English term appears in the German translation, it has an alienating effect on her.

Matt: I had the same feeling. I know the play well, but in German it becomes totally new and foreign – even while I recognize the lines. And the translation stuck closely to the Americanness of the original – Biff plays American football, and Willy’s name is pronounced with a W and not a German V, for example. Which only increased the alienation effect for me – since nobody talks about American football in German!

Leo: I think that there are a number of issues that could have been addressed here, for instance how „national“ myths change when they are churned through the mill of globalization. This particular production refused to engage in this debate.

Matt: Instead, they translated the play into German but kept it entirely American. Well, „Here Comes the Sun“ is now playing.

Leo: And we still haven’t gotten any Elvis!

Matt: I guess we should wrap this up before the sun actually begins to rise…