Ordinarily you can just walk out of the theater if you’re not enjoying the experience–likewise you can close the book, leave the cinema, or skip to the next track. But as a reviewer, that choice is not yours to make. Take for instance Hans Fallada’s Alone in Berlin: I HATED that book, carried it around with me for weeks before I finally finished it and could start writing the tiny little review the magazine was expecting of me. Then I threw it out.

This was back in 2010, when Alone in Berlin was coming out in paperback in the UK (this is of course a neutered version of the original title, Jeder stirbt für sich allein, and US readers got the more faithful Every Man Dies Alone). Although Fallada’s German original had come out in 1947, the book had been a sudden success when it was first translated into English in 2009. It is based on the true story of a couple of ‚ordinary‘ Berliners that spread over a hundred anti-Nazi postcards before getting caught and being beheaded at Plötzensee Prison in 1943.

From that short description, the acts of this couple could be read as quietly heroic–a resistance to scale–, but the facts of the case and the situation sketched in Fallada’s book all tell a different story: most of the postcards ended up on Gestapo desks, the terrified finders interrogated and tortured, no one was jolted into action, and the Nazi regime remained rigorously untoppled. 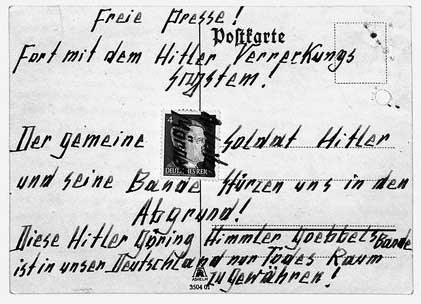 One of the original postcards by Otto and Elise Hampel. © Aufbau Verlag

Having remained in Germany under Hitler’s rule, Fallada himself had a complicated relationship to the Nazis, as they alternately praised and denounced his work, and his more critical works had to be couched in anti-Weimar terms to be publishable. After the war, he is said to have written Every Man Dies Alone in just 24 morphine-dulled days (Fallada would die a few months later, before seeing the book published) and I felt it showed in the book; an endless series of chapters full of flat (and mostly flat-out stupid) characters heading straight for a grim end that was predestined by the original events. What was worse was the message it left me with: resistance is futile.

Seen outside of its Star Trek context, this line is terrifying: What is an independent mind to do when faced with an assimilatory horror if it cannot resist? It is a quick hop-skip-jump from that to resistance was impossible or there was nothing we could have done or even it wasn’t my fault. Much worse than ‚ich habe es nicht gewusst‘, this excuse would imply that, as every man dies alone anyway, why even try to save another person’s life; why stand up to the system when you’re going to die alone anyway?

One hopes that those reading the book today do not come to similarly easy conclusions, and that instead the story would make them think more on just what ‚resistance‘ means. I hear Luk Perceval and Christina Bellingen’s adaptation is four hours long and retains almost all of the book’s characters. Urgh. Though it’ll be a significantly shorter experience than reading that dreadful book, I have to admit I’m not so slightly dreading the prospect. No matter, I’ll be there tomorrow night though, how could I resist?