Praised by the jury for her „wonderfully overwrought, stylized circus figures,“ British Berlin-based actress and dancer Kate Strong is performing in the Theatertreffen for the second year in a row in a production from versatile director Karin Henkel. Gerhart Hauptmann’s „The Rats“ is set in an end of the 19th century Berlin and interweaves a traditional narrative with commentary on the nature and societal role of theater.

Summer Banks: Part of the concept for this „The Rats“  from Schauspiel Köln is that the performers use different styles of acting. How do your three characters, and speaking English, work within that?

Kate Strong: For the first two I’m completely fake: it has to be completely artificial. First I’m a drunken old pathetic mother and then I’m like a fuck monster. The last one’s from the Rhineland and the text that she has is a long, long monologue which is basically garbage. She’s just inventing stuff and it’s embarrassing, because she wants to present herself as better than she is—in the upper social class and not the lower. She talks rot basically, so I do it in English. 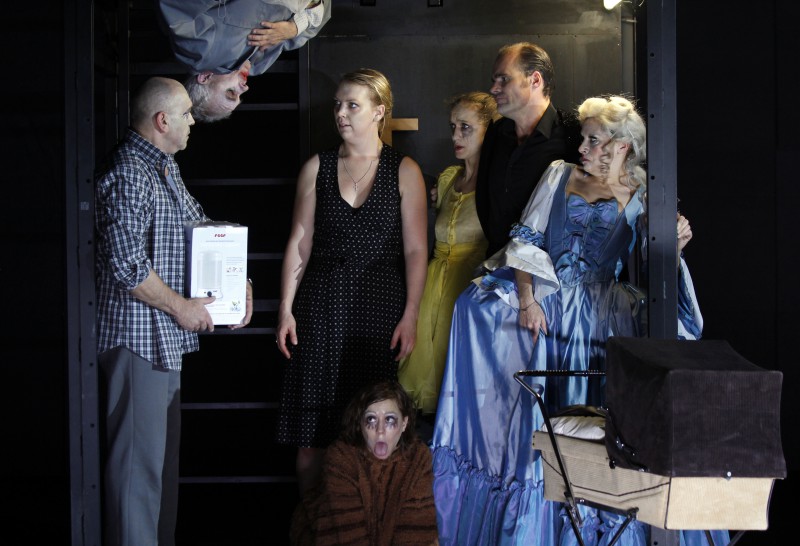 Kate Strong (on the right side) dons a wig and a ridiculous dress as Frau Hassenreuter. Photo Credit: Klaus Lefebvre

Hauptmann’s work also incorporates commentary on the attempt to bring current issues in society to the stage through a form of naturalism. How does this come out in this production?

The whole time we’re talking about social dramas. Can you justify doing, bringing, can you bring social themes to the stage? Does it make any sense to change your voice and speak in different way and act as if you’re someone else? The whole time we’re questioning if you can do that or not. At the same time, we’re doing it because we use accents and dialects and we are playing fake and real and artifice.

So what do you think about naturalism?

Boring. What your grandma can do. And that’s discussed all the way through the piece. At the same time, Lina Beckmann is in it completely. She’s a fantastic actress and you believe her all the time. You have an empathy with her: sometimes she’s offensive, but you’re still with her because she’s fucking good at what she does. In that sense, it does bloody work.

What’s your experience of the Theatertreffen been like: coming to Berlin and then being judged by different audiences and a new set of critics?

I’m not sensitive to these things. If they say Kate Strong is shit, I don’t care. I’m an old woman: I don’t care what people think about me. I mean, what would critics do without our mistakes?

Why did you switch from dancing to acting?

I started talking for Bill Forsythe on stage. And I was like, “Hey, this is much more efficient for communicating something than an arm is. An arm is just a story that’s from there to there.” (motions from shoulder to hand). I always felt more comfortable with the voice and speaking. It was less stressy.

The only thing I could take with me from one into the other was discipline. That was it. Really, I thought it would be much easier. It was like a sort of half-way experienced dancer has to jump in in a production that she doesn’t know, and halfway through the piece, she asks the person next to her what’s next and they say “the egg step” and she’s like, “Well, what the fuck is the egg step?” That’s how it felt for me. I had no idea. I had to learn by doing. But I was also faced with new jargon and you can’t decipher that. Especially when that new jargon is coming in East German dialect …and I’m practically deaf.

How did you start working for Volksbühne artistic director Frank Castorf after coming to theater with choreographer Johann Kresnik in 1994?

I asked (Castorf) if I could stay but on his side of the house with the actors and he said “Yeah, sure.”… So then I worked with him again and again. Because I was fresh, I suppose. And I knew that Kresnik was a complete twat. I used to take the piss out of the productions onstage. And of course Franky likes anyone who’s slightly, what’s the word, subversive … And then, after about five years, I started doing too much work in other productions and so he fired me, which was good because it was difficult for him to cast me – I wasn’t East I wasn’t West; I wasn’t the enemy, I wasn’t the friend.