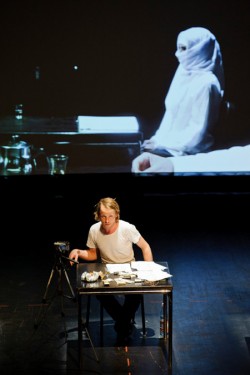 Stefan Konarske as young journalist and Seyneb Saleh as the daughter of the hotel porter in Konradin Kunze's "foreign angst". Foto: Piero Chiussi

In foreign angst, Stückemarkt playwright Konradin Kunze sets a German sort-of journalist in a sort-of Arabic country, war-torn and rundown and, simply put, not the way Kunze’s protagonist imagined it. The play explores the German „Angst“ (fear) of what’s strange to us, but Kunze says you can pronounce the title any way you like – although an English „foreign“ and German „Angst“ fits the piece’s multilingual leanings. After the reading of his play I talked with Kunze via Skype, that faithful friend that so often accompanies us when we travel far from home.

Below are some tidbits about Kunze and his work that didn’t fit into our Skype interview.

1. How did you start doing what it is you’re doing? „I came to playwriting by accident,“ Kunze explained at the writers‘ panel. First an actor, he’d get ideas for things he wanted to direct; and because he was an actor, he had the contacts and the infrastructure to actually do it. Playwriting came one step after directing; foreign angst is Kunze’s first play written without a specific, pre-planned performance.

2. Where does your work come from? Experiences are important, and traveling, traveling, traveling is one of Kunze’s attempts to build up experiences. There’s a success record, too. Though certainly not autobiographical, foreign angst was inspired by an encounter Kunze had when he and his girlfriend were robbed in India. „What can you write about if you don’t have experiences?“

4. Concrete biographical information, please! Kunze was born in Freiburg in 1977, studied acting at the School of Music and Theatre in Hanover and is a graduate of the European Animation Masterclass at the International Academy of Media and Arts, Halle. He has acted in over 40 productions in Freiburg, Hanover, Bremen and Hamburg. As a playwright he has featured in the following plays, some of which he has also directed himself: ‘Playback Life’ (2003), ‘Days different … nights too’ (2005, both together with Klaus Schumacher), ‘Paradise Now’ (2008, world premiere Junges Schauspielhaus Hamburg), ‘foreign angst’ (2010) and ‘A Small, Small World’ (2011, together with Sophia Stepf, world premiere Goethe-Institut Dhaka, Bangladesch). Other directing credits include ‘NippleJesus’ (2006) and ‘Bombel’ (world premiere 2009, Theater Plauen-Zwickau); he is currently directing ‘The Thirsty Ones’ by Wajdi Mouawad, which will premiere in April at Theater Bremen. From 2008 to 2010 he wrote and directed a number of film shorts, which were presented at various festivals. Kunze currently lives in Berlin and India.