A German, a Pole, a Romanian, and an Englishman sit down for a discussion in front of an audience in Berlin. 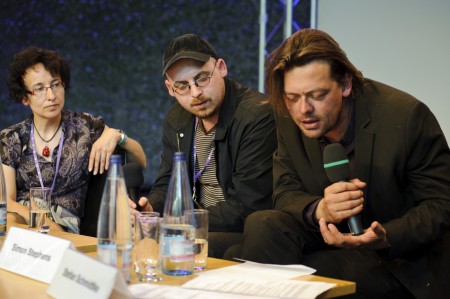 What language do they speak? English, of course. I don’t imagine that you had to guess.

“How embarrassing. This is the nature of colonialism. But at least I can blame America!”

British playwright Simon Stephens (Christmas, Pornography, The Trial of Ubu, and quoted above) gave the keynote address at the opening of the 30th Theatertreffen Stückemarkt (play market) this afternoon. Though he’s widely produced internationally, especially in Germany, he can’t speak any languages other than his imperialist own. Luckily, everybody speaks passable English and they’re willing to humor him (and the rest of us Anglophones). Even though the German, Pole, and Romanian playwrights also on stage – Stefan Schmidtke, Małgorzata Sikorska-Miszczuk (2011 Stückemarkt invitee), and Peca Ştefan (2010 invitee) – are perhaps more comfortable with Russian.

I, for one, am glad not to have to learn Russian to get around in the world. „U – S – A!“ But back to the keynote address.

Stephens has learned five things by having his plays staged in Germany by director Sebastian Nübling, watching his crafted dialog disappear into incomprehensible babble. You can read about these five points in his speech, posted here (preview: the German theater „may be loosely defined as swimming in a surprising amount of both blood and sperm.“)

Addressing the necessity of international productions for playwrights, to close the debate that followed his speech, Stephens said, “What we do as writers is try to tell a story that helps us to understand ourselves and our relationship to society. When I travel, the world shifts. And I try to bring that into my plays.” His advice to young playwrights is to travel and to think like a soccer/football player: Don’t think too far ahead. Just pass the play, take the shot. “If you think about your career, you’re fucked. All you can do is write your next play, make the next line as good as possible.”

And try to get your work translated into English, of course.