The term „audience development“ is a new one in Germany – so new, there’s not even one of those wonderful German compound words for it. But as the independent theater scene becomes a stronger presence, theatermakers like Shermin Langhoff of the Ballhaus Naunynstraße and Nicole Oder of the Heimathafen Neukölln are starting to ask themselves: Who is our audience? Who should our audience members be? And how do we find them?

Berlin is a surprising city to live in for an American theatergoer used to American audience sizes. The selling capacity of theaters in the United States, for the most part, just doesn’t compare. Germany hasn’t felt the need to think too much about its audiences, because its theaters are always full. And also because that’s not where they’re getting their money anyway.

As Berlin’s independent theater scene gets more and more visible, however, the voices of smaller, independent theaters that aren’t always full are getting louder. At the talkback after Verrücktes Blut at Ballhaus Naunynstraße, the „target audience“ question was part of what made the discussion turn heated. Artistic director Shermin Langhoff sees the ideal Ballhaus audience as primarily existing of people with „migrant backgrounds,“ which would make ita kind of by-of-for theater. In contrast, Nurkan Erpulat, director/co-author of Verrücktes Blut, sees the target audience as white, educated, middle-class. And everyone at the Ballhaus is opposed to the idea of targeting an audience of children or youth – something that the Augenblick mal! jury seemed to find very offensive during its talk last weekend. (A bi-annual festival of children and youth theater that runs concurrently with the Theatertreffen, Augenblick mal! also invited Verrücktes Blut to their festival this year. The Ballhaus turned them down.)

Only two years old, the Ballhaus has experienced a drastic audience shift after the opening of Verrücktes Blut in fall 2011, which received lots of press attention and praise. Before then, the Ballhaus played its post-migrant theater to a primarily Kreuzberg audience, an audience more similar to Langhoff’s ideal. Says Ballhaus dramaturg Oliver Kontny: „Before that, our audience was one that would show up to the Ballhaus five minutes after the show was scheduled to start and try to buy a ticket. That’s why Ballhaus shows traditionally were advertised as starting at 7:45.“ But the audience that Verrücktes Blut has brought in is an audience that buys its tickets months ahead of time, online, with a credit card (a rare luxury in Berlin) – something that shuts out much of the original audience base.

Director Nicole Oder can’t say for sure whether her Neukölln Trilogy is post-migrant theater „because I don’t really know what ‚post-migrant‘ means.“ Instead, the Heimathafen appropriated another existing term and is redefining it to fit their purposes: Volkstheater. People’s theater.

„It’s an archaic term,“ says Oder, „it’s kind of taboo to use, and that’s exactly why we wanted to use it: to alter its meaning.“

In overcoming the populist reputation of the word Volkstheater, the Heimathafen isn’t working against its spirit. „It’s always had a lot to do with the relationship to the audience, and we feel an obligation to our audience. Art is a dialogue.“ The Heimathafen self-proclaimedly makes theater for and with the city, helping this particular neighborhood find and define its identity in a city that’s been in a state of identity crisis since the second World War. This includes re-visiting old stage plays and discovering what relevance they can have to modern Berlin; creating new work that deals with urban subjects; and acting as a „laboratory“ for new forms and interaction with tough topics. The Heimathafen wants to reach its community, but without giving up on artistic, aesthetic, or challenging subject matter.

Heimathafen Neukölln uses many different tactics to get Neuköllners into the theater. The monthly or bi-monthly schedule of performances and events that the theater publishes always has a photograph of a different Neukölln resident on the front. There are Neukölln Days, where neighborhood residents get a discount on tickets. The themes that the theater addresses in its productions and co-productions are themes that are close to home, like the Neukölln Trilogy, with two of its parts based on books by journalist and social worker Güner Balci about her own experiences working with Neukölln youth. And, of course, word of mouth is key.

Oder says that the Heimathafen audience is mixed, with shows like The Rixdorfer Pearls bringing in a much older audience than ArabQueen. But what would be her ideal audience? „As heterogeneous as possible.“ She loves it when schoolkids fill one row of seats and middle-aged married couples another. „Everybody searches for their own meaning in the play, and it’s much more interesting when there are a lot of different interpretations going on. Last Tuesday we had a performance of ArabQueen where, coincidentally, two groups from a very similar ‚upper-class‘ background made up most of the audience. It really changed the show. I prefer it mixed.“

In the American regional theater scene, where subscription sales, ticket sales, and private donors are a huge portion of a theater company’s income, we are always talking about our audience members. Who are they? Where did they hear about us? How can we keep them coming to the theater? Who isn’t coming to the theater, and how can we reach out to them?

To try and answer these questions, American theater companies try a lot of things. They pack audience surveys in nearly every playbill (it’s pretty much unheard-of to pay for a playbill in the States, though they aren’t nearly as nice as a Programmheft at, say, the Schaubühne). They go a little hyper-active with Facebook and Twitter, and they keep blogs about rehearsal processes and performances. If they’re a company of any size, they probably have some kind of educational wing, which helps to raise the next generation of theatergoers – and to bring in grant money. And they often have a „Director of Audience Development“ among their (in comparison to German theater, tiny) staff. 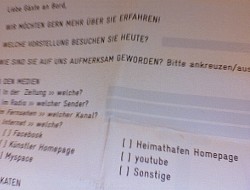 As the theater scene in Berlin and throughout Germany diversifies, theaters here are gradually getting more and more interested in asking those questions and trying those strategies – naturally, starting with the independent scene. This season the Ballhaus and the Heimathafen both are doing something very American. For the first time, they are surveying their audiences – the Ballhaus in partnership with the Center for Audience Development (in German: Zentrum für Audience Development) at the Free University of Berlin, the Heimathafen on its own.

So – who are the Ballhaus and Heimathafen audiences? In Langhoff’s words, „At the end of this season, we’ll know for sure.“ Getting a clear picture of the audience now is the first step towards reaching a new audience tomorrow – maybe an audience that’s a mixture of young and old, Kreuzbergers and Prenzlauer Bergers, high income and Hartz IV, female and male, „Biodeutsch“ and „Neudeutsch“, just like the mix of people you’d see walking down the street past any of the countless theaters in Berlin. The audience is the final ingredient in the creation of a piece of theater; theater companies here are moving towards a deeper exploration of how that ingredient changes, defines, and refines the meal.