Tonight is the last official night of the Theatertreffen, and we are blogging up to the final minute, with the last of our live blogs. Starting at 22:00, you can follow the Via Intolleranza II audience discussion here. I will be sharing the threads the discussion follows and my impressions and reactions – all in the role of an audience member, filling the seat of those of you who can’t be here but wish you could. So get that „refresh“ button ready, and please feel welcome to comment (in English or German). And as preparation, read up on Christoph Schlingensief’s opera village. 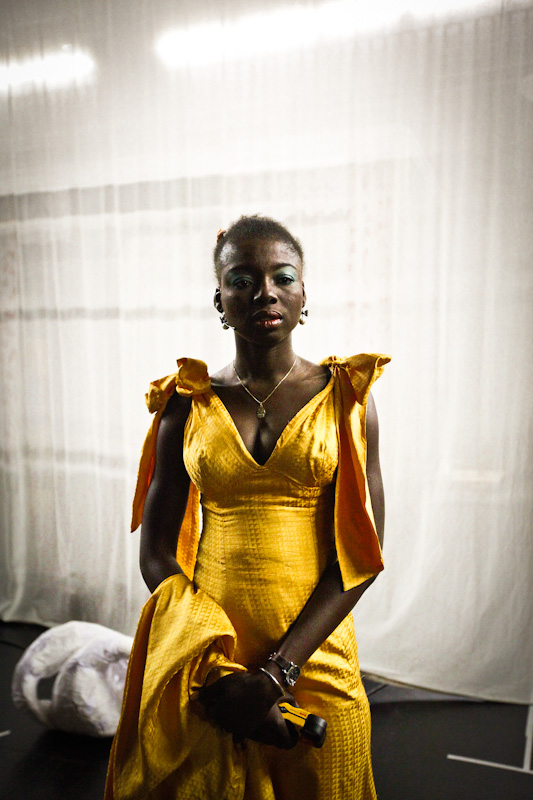 22:13 The talkback is scheduled to start in two minutes – a little later than planned. The show ran until shortly before 10pm, and it’s our last night to enjoy the garden bonfire, after all…

22:17 Slowly but surely, the audience brings its pretzels and beer upstairs. Maybe they were all busy downstairs at the donations booth, responding to the call for donations to the opera village during the curtain call.

22:19 By the way, I hate to spread stereotypes – but I’m really not kidding about the pretzels and beer.

22:20 Here we go! Curious to see how this plays out, because I know a couple of people on the podium don’t speak German.

22:26 A question on the actors from Burkina Faso about the casting in Ougadougu: Why did you want to participate? How did you end up participating? There were 300 people participating – why did you want to take part? Isabelle Tassembedo: „I’ve never acted before, I came because I heard they needed a woman of my age. And as soon as I got there, I realized there was no language barrier. Even though we didn’t speak the same language, I understood him.“ (Also, a correction from Tassembedo: „actually, there were 400 participants.“)

22:30 Schlingensief has a convert to the theater through Tassembedo: „I had a lot of fun. I think I’ll keep going.“

22:31 Tassembedo and Issoufou Kienou are speaking French. Zoungrana’s translating into German. And I’m sharing it in English. This is like Telephone: Extreme Version.

22:33 For those of you who have not seen this show, DAMN does Kienou have a pair of lungs! Which he just demonstrated to us. Thank goodness he didn’t use the mic.

22:35 Agreement on the stage: working with Schlingensief was a wonderful experience.

22:42 Wille reminds us that this is a „relatively normal theater evening – for Schlingensief.“ This is the first Schlingensief I’ve seen live, but from some of the videos I’ve seen and stories I’ve heard, that seems to be an understatement.

22:45 Kolosko, who plays Schlingensief in Via Intolleranza since the director/theatermaker’s recent death from cancer: „I think about him every day. In order to understand how he could write these texts, what his thoughts were … All of this is just to say: I didn’t come to this as a classical actor.“

22:48 Kolosko: „This is a comedy we’re playing. We’re celebrating Christoph on his way out.“

22:50 The title of the play comes from an opera, Intolleranza 1960. But composer/conductor Arno Waschk says it was more of a springboard than a formula, when it comes to both music and plot. (I don’t know the opera; Wikipedia says it’s „a flaming protest against intolerance and oppression and the violation of human dignity.“)

22:57 Kienou’s plea for a producer during the show is apparently a real one. But he hasn’t met one yet.

22:59 The floor is now open for audience questions. Silence. Everybody too sad that TT-11 is almost over to think about asking questions?

23:00 We’re getting an update on the opera village itself. Roofs, school opening in October, everything’s going well.

23:02 An audience member finds a contradiction in the piece – it criticizes the European guilty feeling, the fruitless attempt to help, which she found very interesting; but then, at the end, we as an audience are asked for donations, to continue to participate in this help-culture.

23:04 Costume designer and widow of Schlingensief Aino Laberenz: „We also did this when Christoph was still alive.“ The contradiction is something they own, it’s a piece of the play; „Christoph wrote it himself – to help, to just give out, without expecting anything in return.“

23:07 Kolosko: „Under pressure, nothing happens. Pressure doesn’t bring anything.“

23:12 To the above PC-question is added: this audience member’s friend, who’s black, left the show early. (If we were all more PC, maybe he’d have stayed…)

23:13 Editor’s note: If you didn’t see the play, some non-PC notes: Lines like „You’re darker, so you need more light. Light is expensive, more light is more expensive, you’re twice as dark as me, so you’re twice as expensive.“ Clear irony – as they just pointed out onstage. If PC means I have to find that unacceptable, I’m definitely not PC.