Self-titled „post-migrant“ theater Ballhaus Naunynstraße sits just a stone’s throw from the infamous Kottbusser Tor, birthplace of Döner Kebap and alleged headquarters for drug dealers, gangs and the corruption of German culture through immigrant influence. The Ballhaus‘ raging success Verrücktes Blut (Mad Blood) has been playing to sold-out houses since September 2010 and has received invitations to most of Germany’s major festivals this year, including the Theatertreffen. What’s so hot about postmigrantisches Theater? This lexicon provides a little introduction to the immigration debate currently raging in Germany.

For anyone interested in the topic of post-migrant theatre, Oliver Kontny, dramaturg of Ballhaus Naunynstraße, is delivering a lecture in English and German at Potsdam University tomorrow. 18:00 on May 12, Universität Potsdam, Neues Palais, Haus 09, Hörsaal 1.02. Entry free.

postmigrantisch: Shermin Langhoff, director of the Ballhaus Naunynstraße, didn’t invent this term, but she’s sure been instrumental in defining it. Ballhaus Naunynstraße defines itself as „postmigrantisches Theater,“ which is just to say: it’s concerned with telling the stories of second- and third-generation Germans. Simple the definition may be; but the themes that belong to it are complex. Post-migrant theater asks questions about integration/assimilation, roots, language, education, equality, discrimination, religion, tradition and above all identity. 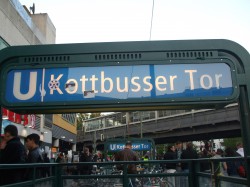 Migrationshintergrund: Literally, „migration background.“ I find this one especially problematic when I’m trying to speak in English about German race politics. In German, you can denote second- and third-generation Germans as „Menschen mit Migrationshintergrund“ but it would sound awfully weird to talk about second- and third-generation Americans that way. The percentage of actors, directors, playwrights and other theatremakers in Germany with a migration background is far smaller than the corresponding percentage of the German population as a whole (in 2010, about 20%).

Multikulti: Actually, there’s no use defining this one, since it’s dead. Angie says so.

Thilo Sarrazin: Conservative politician who splashed the Multikulti debate all over German headlines with the publication of his book Deutschland schafft sich ab (Germany Abolishes Itself) in 2010. Also, he’s really, really racist. After his book people kind of figured that out, which ultimately led to his resignation from his position as member of the Executive Board of the Deutsche Bundesbank. But the SPD (Social Democratic Party) just voted not to revoke his membership.

Mark Terkessidis: The antidote to Sarrazin, Terkessidis wrote a book called Interkultur that criticizes the Multikulti model for public policy. Terkessidis‘ thesis includes a need to start with the assumption that we’re dealing with individuals rather than groups, and that diversity is not a symptom of crisis, but rather, natural and to be expected. Since the publication of Sarrazin’s book, Terkessidis can be found giving lectures at universities, theaters, libraries, schools, festivals, and are you sure he’s not giving one in your living room right now?

Gastarbeiter: These dudes are the source of all of poor Mr. Sarrazin’s problems. From the 50s until the 70s, war-emptied Germany brought in „guest workers“ to help rebuild its economy. Starting in the mid-60s, these guest workers were primarily Turkish. Special contracts with Italy, Spain, Greece, Turkey, Portugal and Yugoslavia regulated the application and placement processes. Usage of the word „guest“ isn’t chance: the host country viewed the workers as temporary additions, and the guests themselves often saw their time in Germany as a short-term thing. But what’s that thing people say? Oh, right: you can’t go home again. Guess everybody shoulda known better.

Leitkultur: The „primary“ culture that, in some views, is endangered by the strong presence of other cultures. Introduced into public use in fall 2000 and represented in Germany mainly by a bunch of dead white dudes, among other things. Verrücktes Blut can be seen as a confrontation between the German Leitkultur and the many-faced „actual“ culture of modern Germany.

Kanake: A derogatory term for immigrants common in German-speaking countries and used today in particular with reference to people of Turkish descent or with connections to Islam. Much like certain English-language derogatory terms, some movements and groups have „reclaimed“ the word (i.e. Kanak Attack, an anti-intolerance political group, and Kanak Sprak, the Turkish German version of Ebonics).

Ausländer: Foreigner. Not politically correct in Germany per se, but definitely in more common usage than its English counterpart. In addition: whereas the term „foreigner“ isn’t one that gets applied to second- or third-generations, you do find „Ausländer“ being used in Germany in that sense – by certain people. For others, it can call up some very unpleasant associations.

Neudeutsch/Biodeutsch: By the time it became clear that the guest workers weren’t just going to pick up and go home, they and their descendants had been living in Germany for a couple of generations. Now things start to get complicated. Does it really make sense to call a second- or third-generation Turkish German an „Ausländer“? No. But we have to call them something! They have Migrationshintergrund! The terms Neudeutsch (new German) and Biodeutsch (biological German) are here to make that all-important task of fitting people into categories a bit easier. Your mom may still be an Ausländerin, but you get to be Neudeutsch. As a side note: „Bio“ is also German for „organic.“ I wonder what that does to our categories… 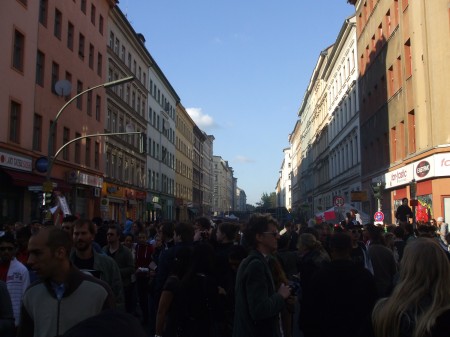 Just down the street from the Ballhaus: Crowds on May 1, 2011 in multicultural Kreuzberg, infamous for its yearly riots on that day. Photo: Cory Tamler