Live-blogging  (almost – there were some internet problems) the first press conference of Theatertreffen 2011.

12:56pm
All are gathering, getting their swag, drinking some coffee, and flipping through the program books. The contestants today are:

Herbert Fritsch, director of Nora and Biberpelz, two of this year’s invited productions.
Iris Laufenberg, the artistic director of the Theatertreffen.
Aino Laberenz, the costume designer for Via Intolleranza II and widow of Christoph Schlingensief.
Joachim Sartorius, the director of the Berliner Festspiele. 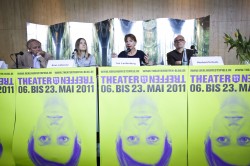 1:08
Germans are not as always punktlich as we foreigners are led to believe: everybody’s mixing and the press conference doesn’t seem ready to start anytime soon. They may be Germans, but they’re also theatre people…

1:10
And here we go! The conference has begun with a lot of promises that the building here, which is currently under major renovations costing €15 million, will actually be ready when the festival officially opens this Friday, the sixth (the Germans had better be punktlich with this). Behind us, outside, the construction crews are working like crazy.

And apparently Sartorius just got back from New York City this morning. I’ve done that flight several times, and I cannot imagine leading a press conference a couple hours after the overnight lands.

1:20
Laufenberg has introduced this year’s great mystery: Can you figure out whose face(s) adorns the Theatertreffen posters? The other debates: What does feminism mean for today’s theater? And what is the role of the “free scene”, the groups not connected to the major state supported theaters?

1:26
Laberenz updates us on Christoph Schlingensief’s famous Opera Village in Burkina Faso, where the corner stone has been laid for the school. This will be the first building finished, and will concentrate on teaching through film and music. The hospital will be next.

1:32
Word up to the English speakers: there will be an English-language discussion of Via Intolleranza II and Schlingensief’s work on the 21st, before the production opens.

1:41
Fritsch isn’t quit sure how to approach the question of a “postfeminist” Nora. (This is not a direct transcription/translation.) “I need to be careful. Frankly I didn’t want to direct the play at all, I’m no great understander of women. It’s a horror-play, the men are absolute monsters. I wanted to play with the fantasy; Hitchcook’s Vertigo was a model for me, for example. I guess I don’t try to think about it too much. It could be post-feminist, but I can’t really say. I’m just trying to have fun with the material, make it spooky.” Laufenberg answers, “Well, we’ll see what the newspapers have to say about that.”

1:53
My favorite question of the press conference: How upset are the major theaters that they weren’t invited to the festival? Laufenberg’s answer: Well, they aren’t upset. Though maybe some of the directors’ are 😉

2:00
Laufenberg says that the blog had  a thousand unique visitors per day last year, and that we’re looking to triple that this year. I guess it’s time to get to work!