Sebastian Nübling’s German-language production of American playwright Tennessee Williams‘ 1957 Orpheus Descending for the Münchner Kammerspiele delves into the complexities of being an outsider, and was praised by the Theatertreffen jury for its “timeless value”. Tonight and tomorrow it is shown at Haus der Berliner Festspiele

Why did you decide to take on the job of staging this little-known work by Tennessee Williams?
It’s a clear story and not too psychological. It’s more like a parable, sort of an evil fairy tale, of a story really going wrong. It’s about how these kinds of situations can develop and not about one single very specific situation. The second reason for doing it was that (Estonian actor) Risto Kübar would play the male lead; that was the main click to say, okay, now it makes sense to produce the play because we have an actor in the centre of the play who is able to perform something between cultures, between languages and also on the gender level between the sexes – so you can understand a bit why this whole community where this stranger lands becomes so troubled on different levels.

How is the relationship of us vs. them portrayed?
It’s not all that simple: we have this kind of community where a stranger comes in and they get a lot of energy out of this guy, a lot of fantasy and projections on a sexual, emotional and violent level in the end. In a way you get the feeling that they need this kind of an other. On one hand to define what they are themselves, and on the negative side what they are not. And on the other hand they suck these strangers dry: there is a vampire side of the system. 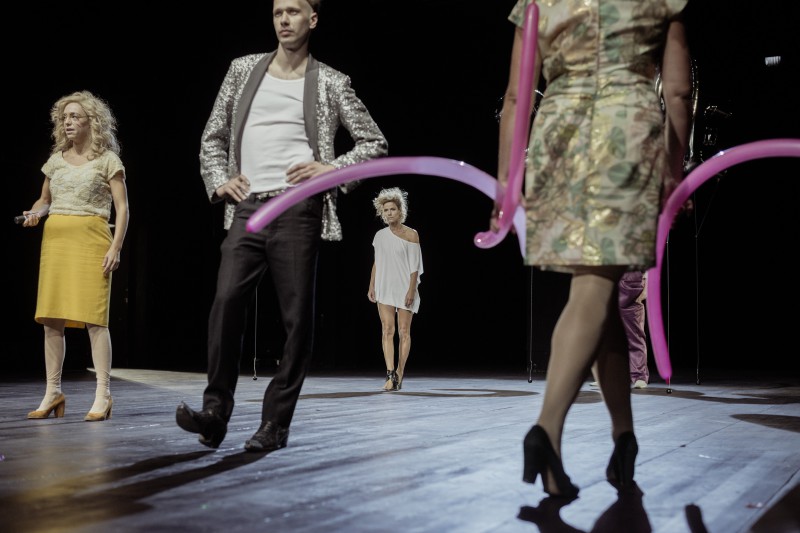 Getting cocky with some balloons. Photo Credit: Julian Röder

The community plays a larger role in this work than in William’s more popular plays, like A Streetcar Named Desire or The Glass Menagerie…
There are stories from individuals you can connect to, but he also tries to build a bigger social network around the centre plot. He tries to communicate something about social circumstances and about the big questions: how do we live together and how do we want to live together and what stops us from living together the way we would like to?

Is the inspiration behind the staging still 1950s America?
I think Bavaria is not so far away from America to be honest: it has, you know, the cowboy hats. It’s sort of a mixture it’s not really like “this is in America” but more like prototype characters from movies and that I think it’s good for that stuff because it’s about prototype situation. It’s in German but you have this actor who doesn’t speak German in real life and so he learned the role on a phonetic basis.

What was that like in rehearsals?
It was a lot of learning – like learning an instrument in two months. If you’ve ever heard someone learning violin, it’s a lot of strange scratches and sounds that you get.

You began your career with a collective in the Freie Szene (independent scene), why did you switch to more traditional directing?
I was done being a performer, and I did some organisational things for a few years because we had three children and had to bring in some money. And at the end of my thirties, I had a bad job that I didn’t like and not really good money, and I said, „Well I want to direct, I’m a director now.“

And how did you get from that point to directing at a Staatstheater (state-funded institution)?
Everything I did was direct and earn money – it was quite an artistic and economic miracle – but I knew that if my wife and I couldn’t make it work economically then we’d have to do something else. So I did a lot in schools and with amateurs and cabaret and things like that, seven, eight, nine, productions a year. Then I started directing at Junges Theater Basel, and that’s when it really started. Then I was chosen as Nachwuchsregisseur des Jahres (young director of the year) when I was 42, which was interesting (chuckles). I was a bit like „I’m not 25 anymore. I have to get up at 6.30 in the morning to wake up the children and make breakfast!“ But for me it was good this way.

You’ve been invited to the Theatertreffen before. What was your experience like?
It’s a bit masochistic to go to Berlin: it’s fun to be there but you get bashed by the critics. Normally you have different spaces for the work, you have a different audience and the audience in on the first night in Berlin is more or less a lot of theatre people. It’s sometimes quite absurd: the first time I was invited with a production from Basel we had quite a lot of good reviews from the local papers. Then we got bad reviews for the same production in Berlin, even from the local papers, so in a way, you change frames. And that’s a good experience to have, to present your work in a different frame.