We asked the directors of the invited productions of tt09 for a short blog-article by putting a question to them. Martin Kušej, born in Kärnten in 1961, explains, why he rejects the Austrian author Karl Schönherr but nevertheless considers him interesting. 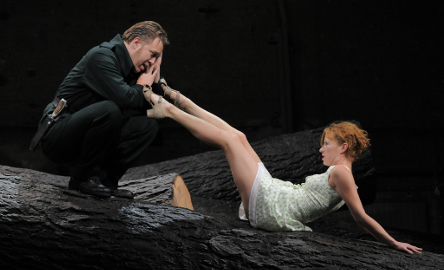 Why are you interested in ideologically dressed up plays?

Ideology, at the moment actually has something antiquated about it and most young theatre-people run from it like the devil from Holy Water… At the same time their critique of ideology is extremely weak, moves in the realms of the vague, the informal, the general. Of course in this context I´m interested in what arouses my sense of resistance (probably spurned from a certain humanistic education, and this is somehaow the tradition which has shaped me) on the other hand, hiding behind the spectre of ideology there is often just a simple attitude, an idea, a clear demand for change or Utopia. This is an absolute essential part of my work.

In the special case of Karl Schönherr his ideology of course is to be rejected. And this is where I bite the bullet and don´t do, what I normally do, that is a scenic translation of the good old “intention of the author”, but give this immensly theatrical and highly emotional author a leg up. I can´t just ignore one hundred years of development in societal thinking. So what shows is, that underneath his “dressed up” ideology we can find a great author who simply deals with very fundamental, almost archaic problems of man. Those precipices of sexuality, of identity or faith, deeply anchored within ourselves, he fathoms mercilessly. And as my experience shows this still initiates an immense interest.

You like directing the great Austrian authors: do you love your home country?

This question contains precisely what annoys me. Talking of Austrian literature in Germany quickly gets such a folky-touristy touch… First of all I´m all for establishing Austrian drama as an integrated and equal part of German-speaking literature and this is where I develop a certain missionary´s zeal which admittedly often leads to frustrating results. Most of all Grillparzer and Nestroy are simply ignored still. And that despite the fact that there where hardly any authors in the first half of the 19th century who have asked questions about society and esthetic as sharp and intelligent as Grillparzer or analysed the times between the Vienna Congress and the revolution of 1848 as wickedly and abysmally comical as Nestroy did.
Above all, Austrian authors of nowadays, like Handke, Turrini or Jelinek weren´t even conceivable without these predecessors. Actually not even followers like Werner Schwab or – very up to date and now even hot in Germany- Ewald Palmetshofer or Händl Klaus…

But to come back to the second part of the question: No, I do not love my home country!
But I can´t really get rid of it either, and I think that is precisely the crossing point with most of the Austrian authors. There certainly is some sort of community in souls which brings their plays very close to me.

Are gender roles a force of nature?

Yes, if one simply allows this question to pass without questioning it, yes! This is exactly the extreme border-line situation into which Schönherr drags us against our will and our enlightened and Freudian determined views. It is really quite fascinating and I can observe this in each and every single performance of “Der Weibsteufel” how within the time span of one-and-a-half hours hundreds of people develop the common feeling of having had a deep insight into their own world of experience, into their own landscape of soul. Schönherr seems to use a simple and little complex language, his characters´ constellation doesn´t seem to be very stunning at the first glance. But still he manages, like an especially subtle composer, to create a highly dramatic kind of music which you very soon have no chance to escape from and in whose emotional worlds you can get lost in a wonderful way. In addition to that we have three actors, unbelievably concentrated and working on the highest level of their art – yes, I believe something like a “natural force” is being un-leashed there. Something that every-one feels within him-self and that wants out from time to time…