In the interest of full disclosure: My older brother is considered „disabled“, as the term is applied in the oh-so-politically incorrect title of the work Disabled Theater. Over the course of his childhood he was diagnosed with various learning disabilities and eventually with a form of Asperger Syndrome.

This means that people perceived to have various varieties of intellectual handicaps have always been a part of my life. I can also still remember the years before I realized that society would treat my brother so differently from me. Before the teasing began at school, before the endless cycles of medications, before his job prospects started to sink from minimal to almost non-existent.

So when I sat in the HAU1 theater in November looking at the „disabled“ actors present themselves and be presented in Disabled Theater, I didn’t instantly feel some sort of new and foreign „otherness“. But I also wasn’t looking for it. I had come to the theater to see Jerome Bel’s work, as commissioned by the Theater Hora in Zurich, so that’s what I was trying to pay attention to.

When it became clear that Bel’s structure was pretty simple – a series of instructions that were dutifully completed – I tried to understand his rationale for presenting these performers in such a fashion. And while it wasn’t entirely clear in the theater, I went through his website later, and saw in an interview with the piece’s dramaturg that the structure is basically a retelling of his initial encounters with the performers. This experience apparently had such an impact on him that he decided to keep it as the end product, allowing the audience to go through the same process of discovery that he did – which I guess I can understand as a charmingly naive and child-like approach to the subject of disabilities on stage. 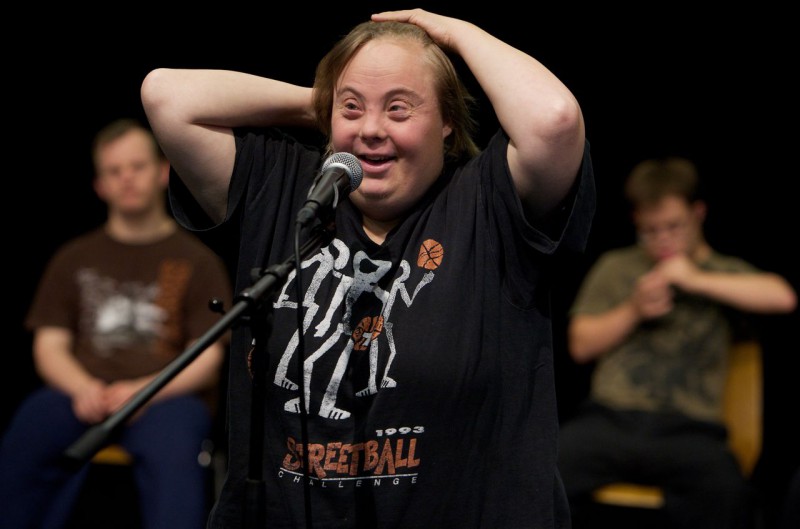 Theater Hora performer Lorraine Meier in front of the rest of the ensemble during a performance of Disabled Theater. Photo Credit: Michael Bause

But it also comes across as a certain ignorance of the place of intellectual handicaps in society in general and theater specifically (in Berlin Theater RambaZamba and Theater Thikwa have been working with actors perceived to have intellectual disabilities for a total of over forty years). And while Bel’s experience may reflect that of society at large, his presentation brazenly fails to question it.

Increasingly disappointed with the structure’s lack of substance, I turned to staring at my fellow audience members. With this change in perspective I could see most of the rest of the audience as the freaks, an impoverished people excluded from the part of society where intellectual „disabilities“ exist. But this is just shifting the gaze, like staring at people staring at animals at the zoo, distancing or switching frames doesn’t automatically equal analysis, spur questioning or begin change.

In the end, I identified most with one of the performer’s family members – go figure – who, as quoted in the piece, said the performance was like a freak show. Because for us, our siblings aren’t just members of a group defined by society as „disabled“. They’re also individuals, and we know that all other brothers, sisters, children perceived to have mental handicaps are diverse and unique. But, in contrast to Bel’s other works, it was this abstract group that was the overall subject, not the individual performers. They are presented as arbitrary representatives of an „other“ and therefore serve the same role as freaks in the historical freak show tradition, however positively framed.

Which is why the next steps must be taken outside the space of the performance. Those of us who sat in the audience and felt like we were awkwardly forced to be passive recipients have to compensate for Bel’s lack of focused dialogue. I’m particularly looking forward to the reactions and questions that come up at the Disabled people on the stage – artists or exhibits? symposium on Monday.

In the end, I’m also glad Bel made the piece, attached his name to Theater Hora and gave them that exposure. But I stand by my initial reaction to the performance: Thank God „disabled“ actors can also be hired to participate in poorly-conceived art. If that’s not some sign of integration, I don’t know what is.