We asked the directors of all the invited productions that will be part of tt09 for a short
article in our blog and put a question to them. Volker Lösch, director of the “Marat”-production that caused a scandal in Hamburg, criticises the term “theatre-revolution”. 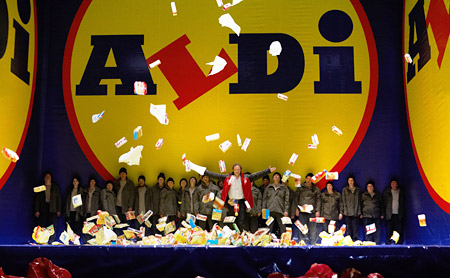 Staged revolution! The choir from Volker Lösch´s production “Marat- or what has happened to our revolution?”

In theatre, there are no revolutions repeating themselves
As there neither have ever been revolutions
Nor will there ever be revolutions in the theatre
Everything revolutionary is basically alien to theatre
Because it only ever deals with
The representative
There is an silent agreement
That revolutions are only ever staged
And even not made for real
Revolutions change that what exists radically
And no-one in the theatre wants that
The theatre-revolution then
Is only a figment of illusion by the press