From the theme of the Talentetreffen, to a women-in-directing exhibit, to yesterday’s „Feminism: Today a Dirty Word?“ discussion and more, gender has been a big topic at this year’s Theatertreffen. As the Theatertreffen Stückemarkt prepares to wrap up tonight with the awarding of the 2011 playwriting prizes, which include cash for the author and a production of the winning play, there are numbers that beg the question: what is the Theatertreffen as a whole really doing to contribute meaningfully to the gender debate – other than just talking about it?

We’re thrilled to see a debate happening on the blog – over a sexist-or-maybe-not-remark from director Herbert Fritsch, invited twice to the Theatertreffen this year, and both times with a play centered on a strong female character (in the case of A Doll’s House, one of the strongest female characters in the dramatic canon). For you non-German speakers, it boils down to a little something like: Fritsch says he likes a woman who’s a „Luder“ (hard to translate but suggestions include „hussy,“ „minx,“ or my personal favorite, „a sly cow“). Some folks find this sexist and unacceptable for a theater director because of the way that implies he interprets female characters onstage, others find it to be a mere personal preference and therefore don’t see the harm in it, still others seem to be worrying about how the actresses themselves must feel having to act out Fritsch’s female caricatures for an audience.

Personally, I’m inclined to say Fritsch can go ahead and show whatever he wants onstage – as long as there’s room left for other perspectives to be shown. It shouldn’t be a problem for him to tell a story the way he wants to tell it – as long as other stories are getting their chance to be told.

And in theory, everybody gets to tell their story. But there’s a big gap here between theory and practice.

The „post-migrant theater“ movement represents one part of the population not getting its proportional share of stage time. Yet there is another group whose presence in the theater world is far smaller than it is in the real world, whose voice is not being heard, whose perspective isn’t being seen. So let’s look at it through some numbers, because after all, numbers are neutral, aren’t they?

Let’s start with the Stückemarkt. There are 15 playwrights listed among the „Stückemarkt Success Stories“ (playwrights who were invited to the Stückemarkt in some capacity in past years and are now doing well). 3 of them are women. Huh? 20%? Are there really that few women out there writing plays? Are their plays really that bad? How does that 20% happen?

Well, let’s take this year as an example. Out of 356 submitted plays, 156 were written by women, 200 were written by men. So about 44% of the submissions were by women. Not quite half, but not terrible.

However, of the eight plays selected for the Stückemart (by a jury that is 40% women), only three have female authors. That’s down to 37.5%.

And not all Stückemarkt plays are created equal. Five of the plays receive staged readings; the other three playwrights receive a workshop. The idea with the workshop is that the plays are „less finished“ – there’s more work to be done. Instead of receiving individual, fully staged readings, these three workshop scripts are lumped together into one „reading of excerpts,“ to be shown tomorrow night.

Of the five plays receiving full readings, one was written by a woman.

So we’ve gone from a 44% representation among submissions to a 20% representation among selections. And if you were at the writer’s panel with the Stückemarkt playwrights last week, you wouldn’t have seen even that 20%; the playwrights at the table were all men. (And Simon Stephens, who opened the Stückemarkt with his keynote, is also a man – don’t let his luscious locks fool you.) 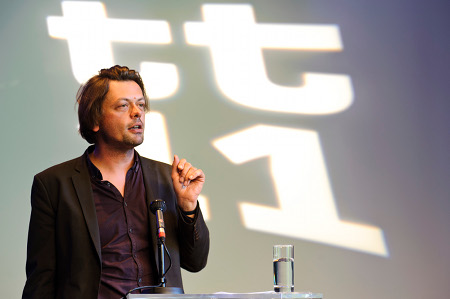 Stephens: the face of the Stückemarkt. Photo: Piero Chiussi

Another set of numbers can be found in the March 2011 edition of Theater heute. Some of them have to do with Germany as a whole: Fritsch: the face of the Theatertreffen. Photo: Yehuda Swed

Fritsch liking a woman who’s „a sly cow“ is no scandal, in and of itself. What is a scandal is that the Herbert Fritsches of the world get far more stage time and pay for their work than the Karin Henkels. What is a scandal is that male playwrights are the face of the Stückemarkt – that they continue to be the face of modern as well as of canonical drama. What is a scandal is sub-titling an exhibit about female directors „a male profession in female hands,“ turning what should be a celebration of women in theater into an affirmation that theater belongs to men. And it’s oh, so nice of them to let us in.

Let’s be clear. I don’t like the idea of a quota and will not argue for one here. I don’t think it works and I think it is a lazy attempt at a solution. The problem is incredibly complicated. Tradition and history are naturally a part of it. The assumption that success for women in the field consists of succeeding within a male heteronormative structure that Leo beautifully criticized (in German) is another part of it. We also can’t write the gender disparity off as blatant sexism. The Stückemarkt plays, for example, were read anonymously; the jurors didn’t know the gender of the playwrights. So how do we assess the dramatic difference between the percentage of women applicants and that of selected female writers? Does this support the thesis that there’s some kind of empirically discernible „female aesthetic“ that’s „boring“ – or is it that „women just can’t write“? (In the States, the 2010 Wendy Wasserstein Prize jury seemed to be of a similar opinion. This is not a Germany-specific problem by a long stretch.)

And what about this: Uwe Gössel, the director of the International Forum at the Theatertreffen, says that every year the Forum receives far more female than male applicants (which they correct for in their selection, trying to create the „most diverse possible“ group). Why is that? Could be because the proportion of women in the independent theater scene, which is where most of the Forum applicants come from, is also much higher than the proportion in the state-funded theaters. And that is also something that brings down the average pay for women in theater. It’s not just that they’re taking breaks to have babies (which is what every woman wants, after all!). It’s that they’re running groups like She She Pop and Gob Squad and Turbo Pascal, working at the boundaries of theater – and, in many cases, not because they couldn’t or can’t get a job at a state-funded theater, but because that isn’t what they want. As the independent scene gains influence and attention, maybe this implicit criticism of the traditional theater structure will lead to a gradual and organic change – more meaningful, with more lasting potential, than imposing any quota could bring.

The theater is a space where artists present their – naturally subjective – visions, preferences, interpretations and dreams. You may find, like Kathrin Röggla cautioned Theater heute, that „feminism has become unsexy“: but even if that’s true, you should still listen up. Because if theater is going to be a relevant part of modern society and a place where we are truly able to engage in meaningful discourse, it can’t continue to obsess over the dreams and visions of the white heterosexual European male. 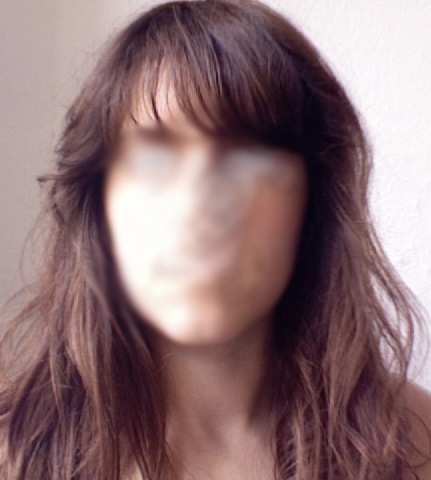 ?: the face of no face. Photo: Cory Tamler