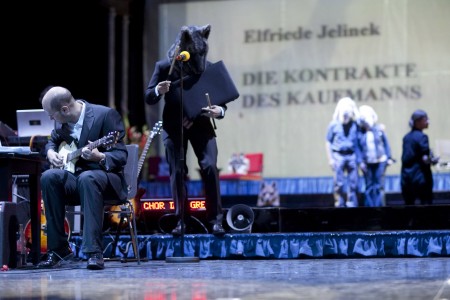 While it seems provisionally appropriate to compare the performance of „Die Kontrakte“ to a marathon, a more apt comparison would be to a decathlon. For, though the evening never strayed too far from Jelinek’s circuitous text, Stemann exploited cheap TV preachers, music video choreography, bad magicians, horror movies, infomercials, musical numbers and ‚whose line is it anyway?‘-like improv to explore a variety of textures that rubbed up against one another, creating a sense of tension and, paradoxically, balance. Through these various textures and formats, Stemann easily moved between hilarity, sadness and instruction in a matter of seconds during a 4 hour event that felt like it was in danger of self-imploding at any second, like it was stretching beyond its reach and would fall on its face. But for me, it never did, it created a perfect balance to Jelinek’s text and I watched like some people watch Nascar: rapt, amused and bemused, wondering: how can this possibly be so entertaining and why do I never want to leave? 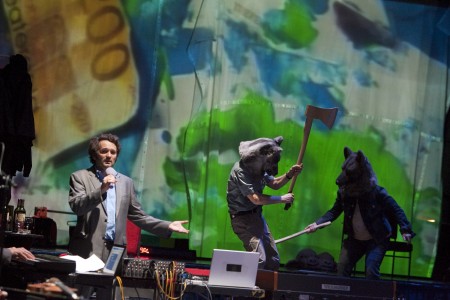 The text, which is an inundation of information about the financial crisis from various perspectives (from the perspective of bankers, banks, a family that loses everything to banks, the angel of equity, etc.), is filled with plays on words, desperation and humor. There are long segments where money is personified, lying on a beach in the Caribbean, sipping cocktails, and getting tan. There are explorations of the absurdities of banks and contracts. In the text, Jelinek is effective in making the absurdity of money and capitalism felt; we’re overwhelmed by the tragedy that money runs the world even though (when we’re talking about things like hedge funds and higher branches of economics) money has more a virtual presence than a material one. And while I’m sure an economist could criticize the naivety of some of the statements about money (i.e. some of the statements felt too ‚dumbed down‘ or simplified), Jelinek remains untouchable in her exploration of its effects on the psyche (of the reader/listener). And indeed, this lack of insider knowledge does not hamper Jelinek or her diminish the strength of her text. For, she is not exploring how money actually works but its effects on her characters, on us. 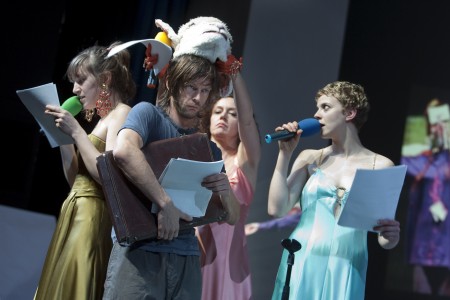 Just as the characters are overwhelmed by their financial problems, Stemann overwhelms the observer with the text, the various textures and the length of the piece. Nevertheless, Stemann and his crew of actors/musicians/video technicians, lead us on a long, arduous and overwhelming journey that can be cancelled at any moment (indeed, Stemann encouraged the audience to leave and come back at their will). Stemann has realized that provoking the audience is not what it used to be. As such, I think he should be praised: clear provocation has served its purpose but it no longer has the tension that it potentially had 100 years ago. More often than not, outright provocation feels like it belongs in the theater now; it has become part of the status quo. And though Stemann and Jelinek certainly do provoke the audience, they do such in an open-ended fashion, admitting that if you want to be provoked, then great, sit here and think and feel; and if you don’t want to be provoked, then please go help yourself at the bar (and feel free to come back whenever you please). The evening then resembles more of an enlightenment cruise ship than it does a theater performance or concert, whose conditions and rituals we imagine to be set in stone. But, and this is Stemann’s genius, they aren’t set in stone, they aren’t closed, they’re very much open-ended – if we want them to be. And it is this openness which makes the evening so effective. It is this openness which makes an otherwise aggressive experience thought provoking and beautiful. You might even say that it serves as an antidote to the subject matter. You might even say, it’s a way out of the normal behavior of theater (and perhaps by extension the way the world works). And maybe, just maybe, this is where Stemann’s critique rests. What a beautiful mess!