In the introduction to 2009’s “Atlas of Remote Islands,” Judith Schalansky describes her book as “primarily a poetic project.” The book—subtitled “Fifty Islands I Have Never Visited and Never Will”—contains precise maps of these faraway places, and passages about the islands’ histories. The texts blur fiction and reality, and it’s rarely the stuff of an idyllic tropical honeymoon. Instead: rape. Human sacrifice. Cannibalism.

But as promised, Schalansky brings poetry to it all. And, in his adaptation of the book, so does Swiss director Thom Luz. His 80-minute production—with its own impressive subtitle, “a polyphonic audioplay on three floors for four actors and as many musicians”—exists somewhere between installation, concert and theater. The project could have gone terribly wrong: it’s easy to imagine it as an ickily romantic ode to colonial luxury, or a blood-and-thunder adventure tale. But Luz spins it into reduced-sugar cotton candy—light, wispy and pleasantly strange.

“Atlas der abgelegenen Inseln” originally went up in Hannover’s opulent Cumberlandsche Galerie. For Theatertreffen, the team had to find an appropriate location in Berlin—a hunt that Luz compared to Klaus Kinski schlepping a steamship across the Peruvian Andes. The effort was worth it. Pankow’s Carl-von-Ossietzky Gymnasium has an imposing sandstone staircase and cherub statues rather than frilly cast-iron railings, but from the time audience members take their seats—distributed across the three landings of the staircase—the neo-Renaissance building has become an actor of its own. 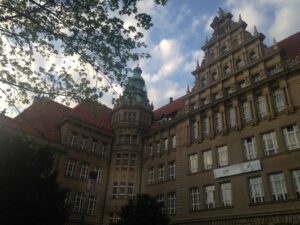 And so it begins. The performers, in black-and-white formal wear, flit like ghosts up and down the stairs. A few keep their eyes on their compasses, looking like harried commuters staring at their phones. A door slams. It slams again. One actor, Oscar Olivo, has dark rings under his eyes. Sophie Krauß, a lank-haired 20-something, gives us a slightly batty smile and, in a whisper, asks us to clap, bobbing her head when we comply. Günther Harder, bearded and holding a loudspeaker, announces that New Zealand’s Department of Conservation is seeking a brave volunteer to spend 12 months on an uninhabited island. The wiry Beatrice Frey, clad in a long white dress, describes the behavior of the now-extinct Steller’s sea cow. They speak in cryptic shards about places that we, like Schalansky, will never know—places with unfamiliar burial rites and strange languages and non-stop volcanic activity.

Their bare feet pad against the stone steps, providing gentle and near-constant percussion. The four musicians—two on violin, one on viola and one on trombone—play snatches of songs, often pretty, sometimes foreboding. A piano plinks. Bells ring. A drum is thumped. A staticky walkie-talkie, tucked into one of the cherub statues, spits out geographic coordinates.

“Ich bin gleich wieder da,” the performers murmur. “I’ll be right back.” And they do return, and then they leave again. The encounters are intimate but ephemeral. And maybe some of it’s patient to the point of taxing, or just a little ridiculous—why is there a block of ice hanging over the drum? What’s with Olivo’s feathered headdress? Was that an extra from „The Grand Budapest Hotel“? Why is Harder now running around in his tighty-whities?