Pretzel or Royal headgear. Andre Schurrle moving to Chelsea. How to properly translate Paddington Bear. Just a few of the highly controversial debates causing sparks to fly between the Germans and the Brits these days.

Yet tonight sees the Theatertreffen premiere of Night Train, a Schauspiel Köln and 59 Productions adaptation of Friederike Mayröcker’s poetry which dispels any doubt that a German-British collaboration is not only possible, but capable of being “remarkable.”

And despite being by definition the most German of German theatre festivals, Night Train’s director Katie Mitchell and dramaturgs Duncan Macmillan and Lyndsey Turner aren’t the first Brits to be included at the Theatertreffen. Last year alone featured three British playwrights: Dennis Kelly opened the Stückemarkt with the memorable speech “Why political theatre is a complete fucking waste of time,” Pamela Carter nabbed the Stückemarkt commission prize (see the result for yourself on Friday 17th at the Maxim Gorki Studio), and Simon Stephens just missed out on a coveted Top Ten spot in the line-up with the German-British-Estonian production of his Three Kingdoms.

Clearly the Brits are infiltrating. But what do they really think of German theatre? I asked directors, playwrights, critics, actors and academics from across the UK to answer four simple questions. Here’s what they said:

WHAT IS THE FIRST THING YOU THINK OF WHEN YOU HEAR THE WORDS „GERMAN THEATRE“? 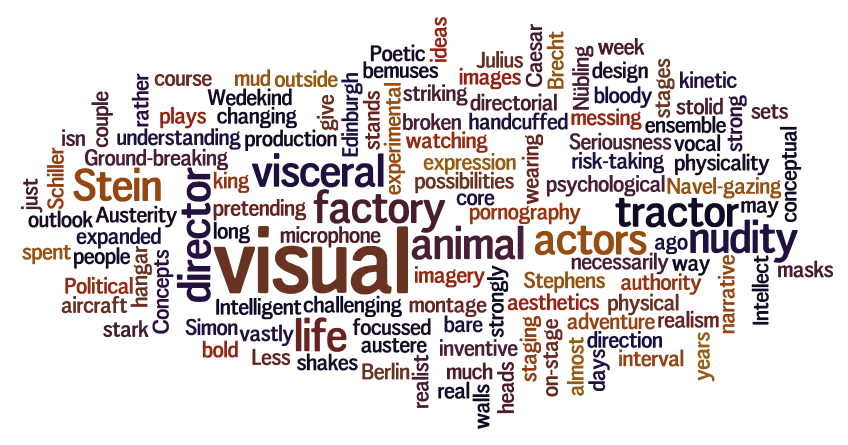 “A very long and stolid production of Julius Caesar by Peter Stein in a tractor factory outside Edinburgh, about which I wrote probably my most succinct review ever, passing a note to a colleague that read “give us a bloody interval, Stein”. It may have been an aircraft hangar rather than a tractor factory (other reports claim so). After that Brecht, Schiller, Wedekind and strongly conceptual staging.” – Nick Curtis, Journalist at the Evening Standard

CAN YOU DESCRIBE A MEMORABLE EXPERIENCE OF GERMAN THEATRE?

“Peter Stein’s production of The Cherry Orchard at the Schaubühne in 1989. This was poetic realism at its finest. When, in the first act, the nursery-shutters were flung open and we saw a profusion of white cherry-blossom, I understood, as if for the first time, why the Gayev family couldn’t bear to leave the estate.” – Michael Billington, Critic at The Guardian

“Thomas Ostermeier’s Hamlet at the Barbican. It was like nothing I’ve seen before, a Hamlet who not only came across as a mad character but also an actor who felt like he was on the verge of his own mental breakdown. Stuffing handfuls of dirt into his mouth and shouting at the audience at how real all of this was, it shook me to my core. Ostermeier got rid of all the fluff of Shakespeare and told the story at the heart of the work.” – Jake Orr, Critic and Founder of A Younger Theatre

“I saw Three Kingdoms by Simon Stephens at the Lyric last year, which was directed by Sebastian Nübling. What was so remarkable about the production was that every scene was somehow massively inventive. You were overwhelmed by beautiful images – trafficked women as deer, women appearing and disappearing out of suitcases. As the narrative gradually fractured the aesthetics became more and more central to the piece – the delivery of the performance seemed of much greater importance than the specifics of the story.” – Edward Kiely, Writer

WHO IS YOUR FAVOURITE GERMAN THEATRE-MAKER, DIRECTOR, ACTOR OR PLAYWRIGHT? 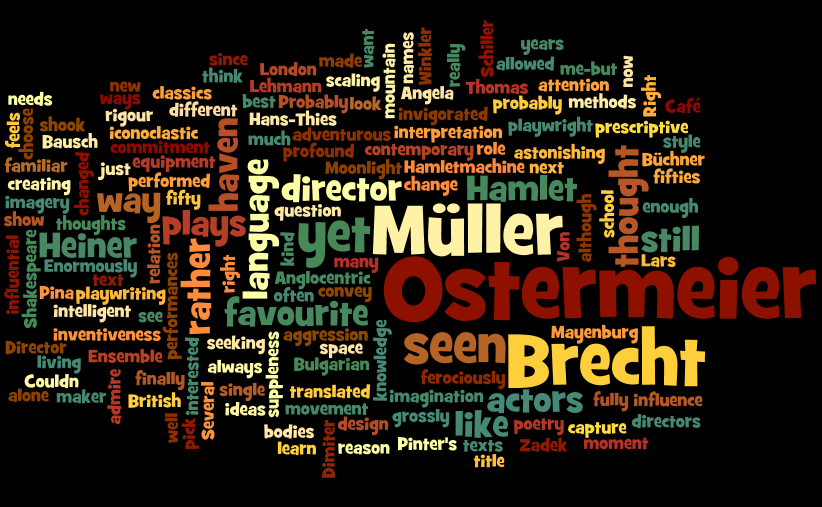 “Thomas Ostermeier – his Hamlet was one of the most profound experiences I’ve ever had in a theatre; forcing me to totally reimagine my relationship to the Shakespeare, whilst also making something utterly new and utterly of itself.” – Ben Power

“Right now, probably Dimiter Gotscheff (if I’m allowed choose a Bulgarian). The movement of the actors‘ bodies in space is more deft than with any other director I’ve seen.” – Jeff James, Director

“Without question BRECHT. Enormously influential. When the Berliner Ensemble came to England in the fifties they invigorated British playwriting and design, particularly at the Royal Court and Theatre Royal Stratford East.” – Robin Hooper, Actor and Playwright

WHAT IS THE BIGGEST DIFFERENCE BETWEEN GERMAN AND BRITISH THEATRE? 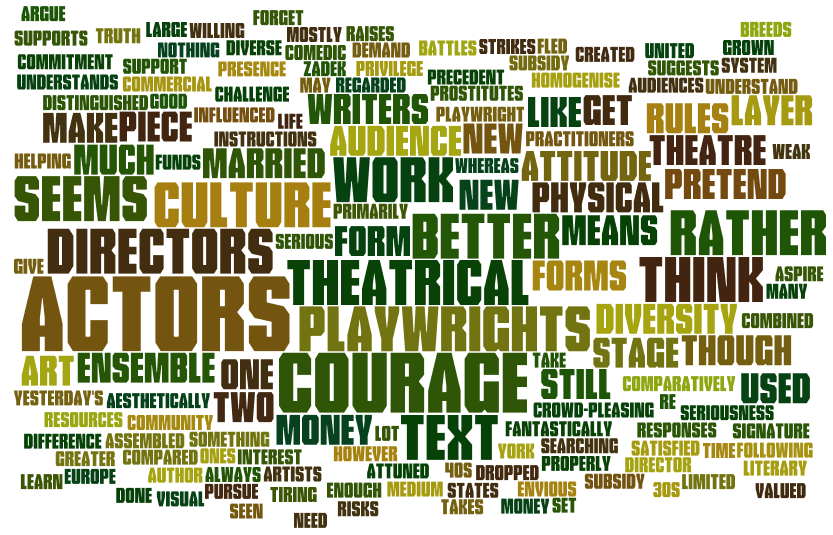 “The scale of ambition – there is good work in the UK, but so much of it seems to be satisfied with fighting yesterday’s battles, rather than searching for new theatrical forms.” – Jeff James

“Subsidy is the chief difference between the two theatres. In Germany, it is regarded as a necessity: in the UK as a privilege.” – Michael Billington

“There was a German performer in Three Kingdoms (Steven Scharf). He did some fantastically physical work that was nothing to do with the text, but added hugely to his menace and status. I don’t think many British actors would have done this. I think British theatre is too married to the text, and German theatre not married enough.” – Jack Monaghan, Actor

“Our respective ideas about the value of culture: Germany funds its theatres properly. German theatres treat their actors like they are respected workers and not prostitutes. German theatre also understands that there is more than one way to stage a text; that the author’s word is not the end of the argument; that a piece of theatre is an art form created from layer upon layer of responses, rather than (at worst in Britain) something assembled by following a set of instructions on a piece of paper.” – Andrew Haydon

“In Germany, it seems like if you make work that breaks the rules you get plaudits. In the UK, you get dropped.” – Edward Kiely

“The money. Because of the greater seriousness with which theatre, and all art, is valued in Germany over the UK. In Germany it strikes me theatre is used as a serious means of helping a culture understand itself. In the UK it always one step away from entertainment.” – Simon Stephens

“I think it is attitude, of theatre-makers, but mostly of audience. German audiences want and demand more, they are willing to experiment and be pushed into territories they’re not used to.” – Jake Orr

“The UK theatre could learn a lot from the courage of German theatre. The courage to abandon literary and theatrical precedent in order to pursue the new, the courage to give artists the space and resources to take risks and challenge form. That courage, though, has grown in a context of long-term subsidy and state support of which the UK theatrical community is rightly envious. If UK theatre seems more crowd-pleasing, it is because of commercial imperatives. I would argue, though, that this breeds a healthy interest in the audience which, if combined with the German attitude to risk would make for a potent combination.” – Ben Power

So there we have it. The most-mentioned German name in the survey by far was Thomas Ostermeier, for which part of the credit must go to the Schaubühne’s friend in London, international theatre host the Barbican (their Fräulein Julie just finished its run there). But does the image that’s being portrayed truly reflect the German theatre scene? Let the debates rage – God knows it’ll be infinitely more interesting than Heidi Klum versus Mel B.