The 5,000€ Alfred-Kerr-Preis for the best performance at the Theatertreffen was announced today, decided and presented by actress Nina Hoss. The prize went to Fabian Hinrichs – here are TT-Blog photographer Nadine`s photos of the award ceremony: 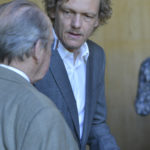 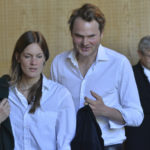 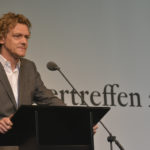 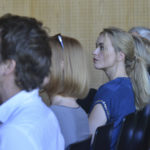 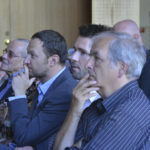 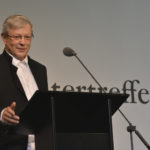 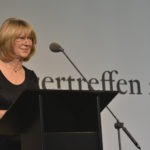 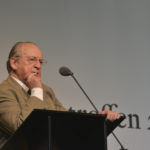 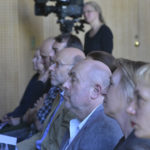 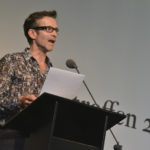 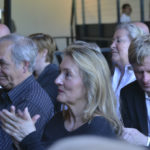 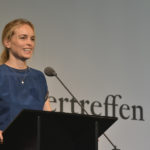 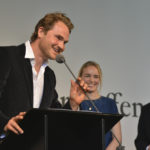 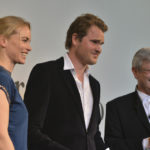 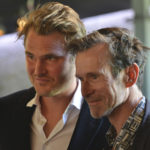 But how did she choose when there were so many different styles of acting treading the boards? Maybe she stole a look at my fact-file, based on some of the leading men and ladies of this year’s festival.
Style: The Entertainer
Example: Fabian Hinrichs, Kill Your Darlings! Streets of Berladelphia
Director: Rene Pollesch
Role: Only speaking part
Costume: Shiny, skin-tight rainbow leggings/Floor-length skirt/Octopus costume
Physicality: Exudes confidence. Opening a performance by skipping in circles around the stage for an extended period of time, chanting phrases from the production that the audience has yet to hear, is not the easiest task. The audience has no idea what’s going on. But there is such assurance and determination in each step, such a complete absence of hesitation, that you have no choice but to trust that he knows what he’s doing. Always open, facing the audience straight on as if to prove he has nothing to hide, and engaging with us directly. Beams almost constantly; his stage presence is not just tirelessly energetic but also good-natured.
Voice: Plays with emphasis, volume, and pauses, creating a conversation with himself on stage that causes you to forget he’s the only person speaking on stage, and opening up an often confusing duality of meaning in the lines. But his sheer confidence means that the audience can be sure of one thing: we are supposed to be confused.
Effect:  Pollesch presents a sea of ideas and information, but Hinrichs guides the audience through it so they never feel like they’re drowning. When an audience member’s phone rang, he absorbed it into his performance without a trace of a break in mood or character – his spontaneous reaction was so seamless it could have been scripted. The strength of this connection to the audience counter-acts any confusion over the monologue he delivers with the feeling that he is performing completely for us, not for himself or to serve a higher aesthetic purpose.

Style: The Introvert
Example: Jana Schulz, Macbeth
Director: Karin Henkel
Role: Macbeth
Costume: Baggy white shirt, white vest, loose black trousers
Physicality: Masculine without any of the clichés of macho exaggeration. Slightly rounded shoulders which caused the upper body to sag and meant the head was inclined to look down at the floor. Movement was also led by the shoulders, so the usual feminine emphasis of the hips was gone. At first sight, this appears to be the posture of someone who has given up, but a tension in the apparently drooping limbs was revealed when Schulz made contact with another actor, for example in her embrace of Banquo.
Voice: No artificial attempt made to sound “like a man”, Schulz’s voice was perhaps the only sure give-away that the part was being played by a woman. Emotion was not hidden by the tone of the voice either, and conveyed a shaky vulnerability.
Effect: The ease with which Schulz combined both “masculine” and “feminine” traits succeeded in making the distinction unimportant. Her introverted, vulnerable Macbeth takes a hold of the audience, and you find yourself seeking her out on stage, crouched unmoving in a far corner, even if a more important part of the story is being told centre stage. Despite the extreme, violent decisions Macbeth makes in the course of the play, it is difficult to know where actor ends and character begins: when Schulz takes her bow she is just as charismatic and mysterious as her performance.

Style: The Chameleon
Example: Sebastian Rudolph, Faust I+II
Director: Nicolas Stemann
Role: Faust
Costume: Leather jacket, shirt, jeans/Snappy dark blue suit
Physicality: Constantly changing. First casual, so natural that he would turn his back to the audience and shuffle upstage. Before you know it he’s über-theatrical, puffing out his chest and illustrating his speech with sweeping hand gestures. Next he’s a comedian, playing three angels fighting for the chance to speak, pulling faces, and waving his hand in the air like a schoolchild who desperately needs to go the toilet. As the production goes on, he becomes more and more suave, not just thanks to the addition of hair gel but through the upright, controlled posture he assumes.
Voice: Changes with the physicality. The casual Rudolph of the opening is matched with a barely comprehensible mumbling, quickly morphing in the boom of the stereotypical „Actor.“ His switching between characters is never confusing, because for each he takes on a distinctive voice and tone.
Effect: An impressive command over many different acting styles. In the case of this production, there are so many other elements at work at the same time, from set and projections, to singing, dancing, and puppets, that you lose track of such a changeable character. It’s far from clear who Faust actually is. Pro: It creates a much broader scope for interpreting the character, and therefore the story. Con: A sprawling production loses what could have been the one constant keeping everything together.

Style: The Alien
Example: Erhart Borkman,* John Gabriel Borkman
Directors: Vegard Vinge, Ida Müller, Trondt Reinholdtsen
Role: Erhart Borkman, son of disgraced bank director John Gabriel Borkman
Costume: Full mask (chubby cheeks and wide eyes), brightly coloured dungarees, and striped t-shirt
*There is very little information provided about the cast of John Gabriel Borkman, so I’ll refer to this actor by the character’s name, Erhart Borkman, and “he” – although there is evidence to suggest the part was in fact played by Ida Müller, the production’s set designer.
Physicality: Robotic movement like that of a video game character being controlled by an outside force. But this is no lifelike CGI game, the character is only programmed with the minimum number of basic moves and gestures. All journeys were made in straight lines, turns only ever in right angles. Erhart’s first entrance saw him repeating the same four steps back and forth across the hallway multiple times, as the „limited programming“ didn’t allow for both coat and hat to be removed at the same time. Every process is broken down into distinct, isolated movements, thus taking off a coat becomes: unzip, outstretch arms, move right arm to left sleeve, pull, move left arm to right sleeve, pull, hold jacket in front of body, shake jacket out. Some movements always have an accompanying gesture, for example giving a wave causes the head to tilt to the left. He has a permanent, exaggerated hunch, and his heels never touch the ground when walking, giving the impression of weightlessness as if controlled by strings from above –  a cross-over between a gaming avatar and a marionette. He remained completely frozen when not speaking or carrying out a specific task.
Voice: In fact performed by another – unseen – actor. Severely distorted through a microphone. Loud, laboured wheezing accompanied all movements when not speaking, which matched Erhart’s hunch and contrasted with the young, high-pitched speaking voice. Often grating, for example through the excessive, squealing repetition of one word, and its volume was unpredictable. Only over-the-top, cartoonish emotion was conveyed.
Effect: This style creates a great distance between the character and the audience. The anti-realism is so extreme that you can never forget that you’re watching an actor playing a part – there is no risk of thinking the two are one and the same! Yet on the other hand, the commitment to the style is consistent throughout the 12-hour performance, making it hard to believe that it is really a human being exercising such control, and not a mechanical toy with no choice in the matter. But the humanness is there in the character’s behaviour, whether it’s masturbating diligently in his bedroom, trying to snuggle up to an emotionally cold mother, or playing with a cardboard football (attached to a stick of course, to prevent any unprogrammed movement). This contrast between the mechanical and the human is simultaneously uncanny and hilarious.

Style: The Movie Star
Example: Sandra Hüller, 4.48 Psychose
Director: Johan Simons
Role: Therapist/Patient
Costume: Little black dress, silver-sequinned high heels
Physicality: Extremely composed, upright posture. Spent most of the play seated centre stage amongst the musical ensemble, very still, with her hands in her lap. When she finally did move, it was to carefully and quietly remove her heels. As the therapist she was completely believable because of the simplicity of her movements; nothing was added for the sake of the stage – the performance would have withstood the scrutiny of close-up shot in a naturalistic film. She resisted the touch of the other actor discreetly and firmly. Her role began to cross-over with that of the patient by the introduction of subtle twitches as she listed the side effects of an array of anti-psychotic drugs. At one point she suddenly stood from her seat in one smooth movement as if involuntarily, stretching her hands out palms up towards the audience, a complete change from the complete control displayed until that point – it conjured the feeling of an out-of-body experience.
Voice: Controlled and calm. Her tone conveyed the conflict of the therapist – sympathy and frustration at the same time. It was friendly, but never crossed the line into unprofessional. Adding to the atmosphere of the out-of-body moment, Hüller sang the lines along with the ensemble, a surprising change that catches the audience off-guard.
Effect: A powerfully ambiguous performance – Hüller’s therapist is so controlled that without doing anything external or visible her perfect exterior betrays the possibility of inner anguish. From early on you wonder whether she is in fact the patient, whether the whole scenario might just be playing out in her head.