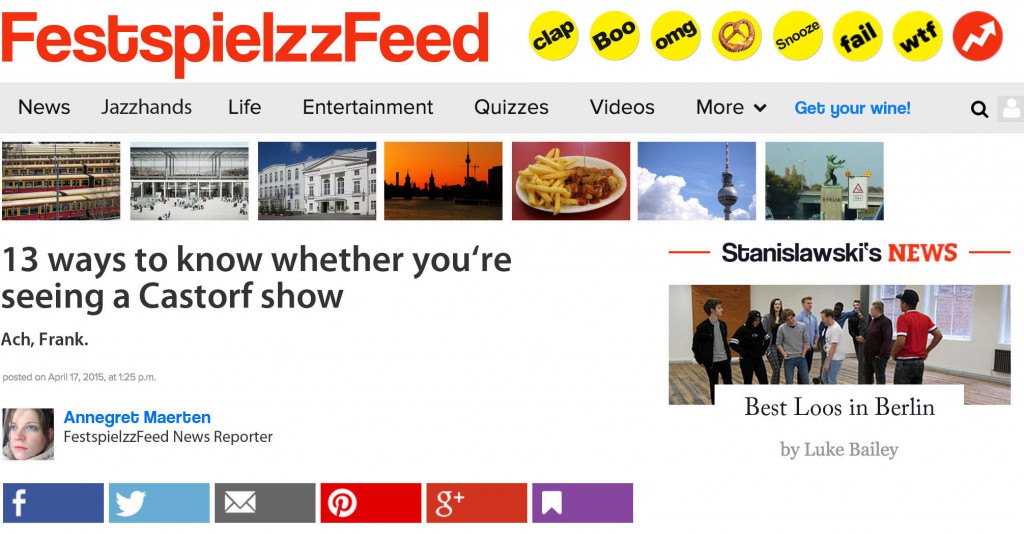 Frank Castorf’s work has been described to me by someone like this: “When I first went to see a show, it was the weirdest thing…like I’d already seen this without actually having seen it before.” I assume this was meant not in a Oh, that’s so derivate!-way and more that his imagery and way of tackling texts has filtered through to so many other other creators’ work that it has become a shared toolkit for other directors too.

Maybe I just misunderstood. I wouldn’t know. I’ve never seen one of his shows before and as someone who’s supposed to blog from the biggest annual theatre event in the country it’s somewhat daunting to have what are supposed to be these big corner stones of German theatre culture missing from my personal reference library.

Instead of giving you a long treatise about what constitutes shared knowledge among culture journalists and how theatre criticism contributes to shaping it, I have decided that I need to get rid of my ignorance by properly confronting my expectations in the only way I know how. I did a poll among my fellow colleagues that adhered to the highest journalistic standards and here, for all of you that have managed to nab a Baal ticket this year and are just as (unwittingly) ignorant as myself, this is the sort of thing we can expect from a Castorf show:

3. “There are cameras everywhere.”

4. “I would call it Theatre of Exhaustion.”

6. “Somehow it combines cuteness and ugliness.”

8. “There were women as chicken with Russian accents in high heels.”

11. “… But there was definitely splattering of blueberry pie.”

Now that’s all super clear, I’m ready for Berlin in all its prettiness and ugliness. I’ll stuff myself with theatre and eat myself hungry. I’ll own my ignorance. If I’m stuck for words or pictures or sounds I’ll go for a walk and look at abandoned gumball machines.